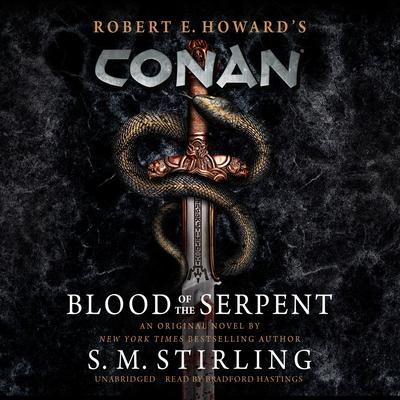 Conan: Blood of the Serpent: The All-New Chronicles of the World's Greatest Barbarian Hero

The pulse-pounding return of Conan, the most iconic fantasy hero in popular culture

Conan the Barbarian, the world’s most famous fantasy hero, returns in an all-new novel tied directly to the famous works by his legendary creator, Robert E. Howard.

In this story, set early in his life, Conan has left his northern homeland to cut a bloody swath across the legendary Hyborian Age. A mercenary, a soldier, a thief, and a pirate, he faces conquering armies, malicious sorcerers, and monstrous creatures—against which he wields only the sword held in his powerful grasp.

The first new Conan novel in more than a decade, Blood of the Serpent leads directly into one of Robert E. Howard’s most famous sword-and-sorcery adventures, “Red Nails,” which as a bonus feature is included in this volume.

S. M. Stirling is the author of science fiction and fantasy fiction, including three stand-alone novels and many novels in eight series, as well as novels in five more series in which he collaborated with Anne McCaffrey, Jerry Pournell, and David Drake, among others.