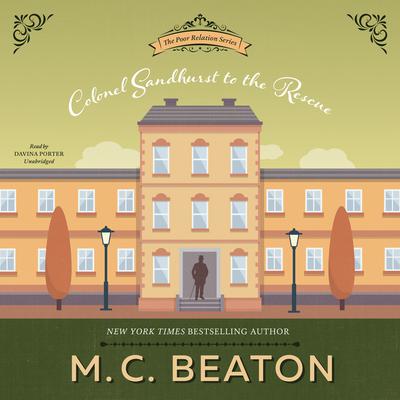 Colonel Sandhurst to the Rescue

Bringing Regency England vibrantly to life, the fifth volume in the Poor Relation series follows the escapades of Colonel Sandhurst as he helps a young woman avoid an unwanted marriage.

Owing to an unfortunate wager made by Sir Philip, the poor relations are once again scrounging around for a plan for solvency. This time it is Colonel Sandhurst to the rescue. After happening on Sir Randolph’s lovely daughter Frederica, who is running away to escape an awful marriage to Lord Bewley, the Colonel devises a plan to force Sir Randolph to settle his bill for six months’ stay and to save Frederica from her fate. The clever plan is thwarted when Lord Bewley shows up at the drop point instead of Sir Randolph. The poor relations must make a deal with Lord Bewley in order to get their money and stay out of jail, an arrangement that turns cases of mistaken identity into cases of romance.

“A lively, entertaining comedy of errors set amid the grandeur of Regency England…Chesney employs a delightful cast of memorable, unconventional (and fabulously named) characters—and she also does a good job of setting up volume six.” —Publishers Weekly
“[Beaton’s] spritely pace, humor, and period touches continue to delight.” —Library Journal
“Colonel Sandhurst…has his turn to play the hero when he rescues a fetching young runaway…The embroilment and eventual escape make for pleasant reading and, naturally, a romantic denouement.” —Booklist