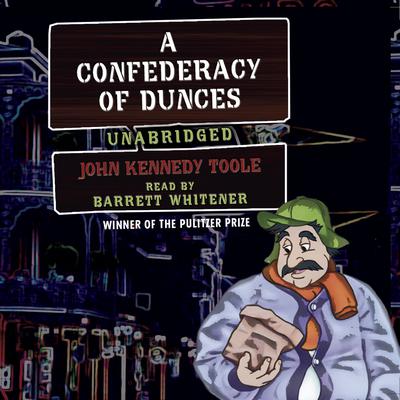 A Confederacy of Dunces

Winner of the 1981 Pulitzer Prize for Fiction

Winner of the 1981 PEN/Faulkner Award

The 2007 SoundCommentary.com’s The Best of the Best Editor's Choice Audiobook

A green hunting cap squeezed the top of the fleshy balloon of a head. The green earflaps, full of large ears and uncut hair and the fine bristles that grew in the ears themselves, stuck out on either side like turn signals indicating two directions at once. Full, pursed lips protruded beneath the bushy black moustache and, at their corners, sank into little folds filled with disapproval and potato chip crumbs.

So enters one of the most memorable characters in recent American fiction.

The hero of John Kennedy Toole's incomparable, Pultizer Prize–winning comic classic is one Ignatius J. Reilly, an obese, self-absorbed, hapless Don Quixote of the French Quarter, whose half-hearted attempts at employment lead to a series of wacky adventures among the lower denizens of New Orleans. This book has become an American comic masterpiece.

“A masterwork of comedy…The novel astonishes with its inventiveness, it lives in the play of its voices.” —New York Times Book Review
“If a book’s price is measured against the laughs it provokes, A Confederacy of Dunces is the bargain of the year.” —Time
“The many subplots that weave through A Confederacy of Dunces are as complicated as anything you’ll find in a Dickens novel, and just as beautifully tied together in the end. But it is Ignatius—selfish, domineering, and deluded, tragic and comic and larger than life—who carries the story. He is a modern-day Quixote beset by giants of the modern age. His fragility cracks the shell of comic bluster, revealing a deep streak of melancholy beneath the antic humor.” —Amazon.com Review
“A comic masterpiece that memorably evokes the city of New Orleans…Toole’s prose is energetic.” —Library Journal
“A masterpiece of character comedy…The novel can hardly contain burstingly funny Ignatius—and the mix of high and low comedy is almost stroboscopic: brilliant, relentless, delicious, perhaps even classic.” —Kirkus Reviews (starred review)
“An astonishingly good novel, radiant with intelligence and artful high comedy.” —Newsweek
“A Confederacy of Dunces has been reviewed almost everywhere, and every reviewer has loved it. For once, everyone is right.” —Rolling Stone
“A corker, an epic comedy, a rumbling, roaring avalanche of a book.” —Washington Post
“His story bursts with wholly original characters, denizens of New Orleans’ lower depths, incredibly true-to-life dialogue, and the zaniest series of high and low comic adventures…What a delight, what a roaring, rollicking, footstomping wonder this book is! I laughed until my sides ached, and then I laughed on.” —Chicago Sun-Times
“The dialogue is superbly mad. You simply sweep along, unbelievably entranced.” —Boston Globe
“A brilliant and evocative novel.” —San Francisco Chronicle
“The episodes explode one after the other like fireworks on a story night. No doubt about it, this book is destined to become a classic.” —Baltimore Sun
“Barrett Whitener strikes just the right note of Rabelaisian iconoclasm. He does justice not only to each memorably drawn character but also to the witty, elegant writing.” —AudioFile

John Kennedy Toole (1937–1969), a native of New Orleans, graduated from Tulane University and received a master’s degree in English from Columbia University. He taught at Hunter College, the University of Southwestern Louisiana, and Dominican College in New Orleans. After his death, his book A Confederacy of Dunceswas awarded the Pulizer Prize in Fiction in 1981.