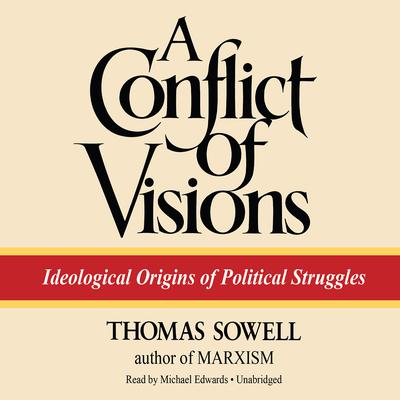 A Conflict of Visions: Ideological Origins of Political Struggles

Controversies in politics arise from many sources, but the conlficts that endure for generations or centuries show a remarkably consistent pattern.

In this book, which the author calls a "culmination of thirty years of work in the history of ideas," Sowell attempts to explain the ideological difference between liberals and conservatives as a disagreement over the moral potential inherent in nature. Those who see that potential as limited prefer to constrain governmental authority, he argues. They feel that reform is difficult and often dangerous, and they put their faith in family, custom, law, and traditional institutions. Conversely, those who have faith in human nature prefer to remove institutional and traditional constraints. Controversies over such diverse issues as criminal justice, income distribution, or war and peace repeatedly show an ideological divide along the lines of these two conflicting visions.

“Extraordinary…[Sowell] makes his case fairly, lucidly, and persuasively.” —New York Times Book Review
“A provocative analysis of the conflicting visions of human nature that have shaped the moral, legal, and economic life of recent times…His discussion of how these conflicting attitudes ultimately produce clashes over equality, social justice, and other issues is instructive.” —Publishers Weekly
“The book builds a convincing case that ethical and policy disputes are ultimately based on the differences in these visions. It covers a wide variety of political, philosophical, and economic thought…An important contribution to our understanding of current social issues.” —Library Journal

Thomas Sowell is a senior fellow at the Hoover Institution, Stanford University. He is the author of dozens of books and the recipient of various awards, including the National Humanities Medal, presented by the president of the United States in 2003.