All Things Left Wild: A Novel

After an attempted horse theft goes tragically wrong, sixteen-year-old Caleb Bentley is on the run with his mean-spirited older brother across the American Southwest at the turn of the twentieth century. Caleb’s moral compass and inner courage will be tested as they travel the harsh terrain and encounter those who have carved out a life there, for good or ill.

Wealthy and bookish Randall Dawson, out of place in this rugged and violent country, is begrudgingly chasing after the Bentley brothers. With little sense of how to survive, much less how to take his revenge, Randall meets Charlotte, a woman experienced in the deadly ways of life in the West. Together they navigate the murky values of vigilante justice.

Powerful and atmospheric, lyrical and fast-paced, All Things Left Wild is a coming-of-age for one man, a midlife odyssey for the other, and an illustration of the violence and corruption prevalent in our fast-expanding country. It artfully sketches the magnificence of the American West as mirrored in the human soul.

“James Wade’s debut novel, All Things Left Wild, is set in the still–Wild West of 1910, and it’s a chase novel/spiritual journey for all involved…Wade writes skillfully about the brutality and bloody history of the West, and of the United States. Every person his travelers meet has a story and a philosophy of life…This is anything but escapist fare, and some of the players might remind you of current leaders.” —Liz French, Library Journal
“This is the kind of novel readers can spend weeks discussing—the philosophical and moral nature of it as well as its fatalistic sense of justice…For a long time to come, All Things Left Wild will linger in the memory of all who read it—the tragedy, the hope, and the irony of it all.” —New York Journal of Books
“This book is about courage, mistakes, and inner morals. It has adventure and passion. This being set back at the beginning of the twentieth century made it very interesting and exciting to read.” —Manhattan Book Review
“James Wade, as tall a whiskey-stained wrangler of words as has ever two-stepped across the dance floors of Austin, has set his debut novel in that post–Civil War domain of cowboys and cactus and corrupt caballeros, and, by Cormac, it’s some mighty powerful stuff…Wade handles all this old-fangled southwestern blood and thunder with a deft, sure hand…He takes a McCarthyan conjunction and uses it to build a cumulative power and that power fuels his sentences and the sentences penetrate your soul and it is good. This is some kind of literary lightning, this first novel of James Wade’s. And now we wait for it to strike again.” —Austin Chronicle
“Transfixing…The author takes a classic western setup and refreshes it with sharp writing, strong characterizations, a vivid evocation of place, and a body count to rival The Wild Bunch. Fans of All the Pretty Horses will want to saddle up for this literary ride.” —Publishers Weekly
“Night, Victorian poet Algernon Swinburne warned, is but the shadow of light, and life just the shadow of death. That, in one breath, is the finely drawn dilemma James Wade turns over and over like a precious, light-refracting, darkness-harboring gemstone that is All Things Left Wild…This is artful fiction drawn with a deft, patient hand. The writing style is an ideal mashup of Larry McMurtry’s burnish and Cormac McCarthy’s grit…Wade’s writerly skill is topnotch and white hot in the visual, visceral quality of his description that breathes the landscape to life as a major character in the story…All Things left Wild is a magnificent, beautifully drawn montage of contemplation, lightning-fast action, uncertainty and inevitability, pain, enormous loss, empty gain, an extraordinary adventure lived, and certainly, in retrospect, one not to be missed.” —Lone Star Literary Life
“A debut full of atmosphere and awe. Wade gives emotional depth to his dust-covered characters, and creates an image of the American West that is harsh and unforgiving, but—like All Things Left Wild—not without hope.” —Sarah Bird, author of Daughter of a Daughter of a Queen
“An intense and lyrical journey through the borderzone of the American Southwest in a time before walls, infused with the real feeling of the land, and of the violence its conquest engenders.” —Christopher Brown, Campbell and World Fantasy Award–nominated author of Tropic of Kansas and Rule of Capture
“James Wade has delivered a McCarthy-esque odyssey with an Elmore Leonard ear for dialogue. All Things Left Wild moves like a coyote across this cracked-earth landscape—relentlessly paced and ambitiously hungry.” —David Joy, author of When These Mountains Burn
“A breathtaking debut! In All Things Left Wild, James Wade paints an exquisite portrait of the American West in all its splendor, violence, and mythic power. Messianic outlaws, deadly orphans, and soul-broken poets ride across a landscape both treacherous and beautiful, finding unthinkable viciousness and unfiltered compassion. With a voice reminiscent of Larry McMurtry and Cormac McCarthy, Wade has managed to craft a novel that is both a lyrical pilgrimage and a thrilling, page-turning adventure.” —Owen Egerton, PEN Southwest Book Award–winning author of Hollow
“As a southerner, the very first sentence wove such a familiar and comforting tapestry, and it never let up. Wade presents rich, flawed, human characters who I feel I know personally even though I’m neither of their time or place. As someone who loves a terrific Western, this book sure did scratch my itch. I hope this book finds its way to Taylor Sheridan because that’s a collaboration I need Hollywood to hop on.” —Corey Ryan Forrester, comedian and author of The Liberal Redneck Manifesto 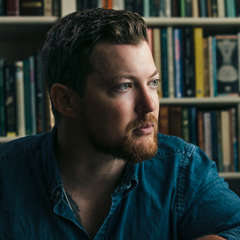 James Wade lives and writes in Austin, Texas, with his wife, Jordan. He has had twenty short stories published in various literary magazines and journals. He is the winner of the Writers’ League of Texas Manuscript Contest and a finalist of the Tethered by Letters Short Fiction Contest. All Things Left Wild is his debut novel.