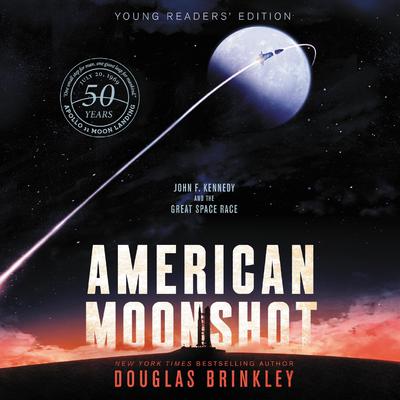 By Douglas Brinkley , with  Winifred Conkling
Read by Stephen Graybill

In anticipation of the 50th anniversary of the first moon landing, New York Times bestselling author and historian Douglas Brinkley delivers a young readers’ edition of a story rooted in heroism, bravery, and patriotism: America’s race to the moon.

July 20, 1969. It’s a day that has earned a spot in history. It’s the day that America was the first nation to succeed in sending two astronauts—Buzz Aldrin and Neil Armstrong—to the moon.

But what led to this unforgettable event? What were the stakes riding on the Apollo 11’s safe landing? In acclaimed author Douglas Brinkley’s first young readers' edition, space fans will get the riveting and factual backstory of arguably the most significant achievement of the 20th century.

Douglas Brinkley, is an acclaimed historian and the multiple award-winning author of numerous New York Times bestsellers. The New York Historical Society has chosen him as their official US presidential historian, and the Chicago Tribune has called him “America’s New Past Master.” Among his numerous awards are the Sperber Prize, Benjamin Franklin Award, the Robert F. Kennedy Book Award, the Theodore and Franklin Roosevelt Naval History Prize, a Grammy Award, Arthur S. Link/Warren F. Kuehl Prize, and Business Week Book of the Year Award. He works in many capacities in the world of public history, including on boards, museums, colleges and historical societies.