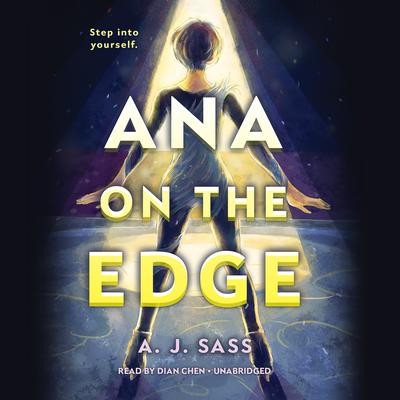 Ana on the Edge

By A. J. Sass
Read by Diane Chen

For fans of George and Ivy Aberdeen's Letter to the World, a heartfelt story about a nonbinary character navigating a binary world.

Twelve-year-old Ana-Marie Jin, the reigning US Juvenile figure skating champion, is not a frilly dress kind of kid. So, when Ana learns that next season's program will be princess themed, doubt forms fast. Still, Ana tries to focus on training and putting together a stellar routine worthy of national success.

Once Ana meets Hayden, a transgender boy new to the rink, thoughts about the princess program and gender identity begin to take center stage. And when Hayden mistakes Ana for a boy, Ana doesn't correct him and finds comfort in this boyish identity when he's around. As their friendship develops, Ana realizes that it's tricky juggling two different identities on one slippery sheet of ice. And with a major competition approaching, Ana must decide whether telling everyone the truth is worth risking years of hard work and sacrifice.

"Ana on the Edge is a poignant exploration of the importance of being seen for who you are. Ana will glide into your heart and open your mind to the richness of the full gender spectrum.” —Ami Polonsky, author of Gracefully Grayson
“Heartfelt, nuanced and engaging, Ana on the Edge is both an insider’s look at the world of competitive figure skating and a sensitive exploration of the protagonist’s nonbinary identity. Highly recommended.” —Barbara Dee, author of Maybe He Just Likes You
“Sass’s gorgeous debut fills a much needed void on LGBTQ+ middle grade shelves.” —Nicole Melleby, award-winning author of Hurricane Season

A. J. Sass is a writer, editor, and occasional mentor. A long-time figure skater, he has passed his U.S. Figure Skating Senior Moves in the Field and Free Skate tests, medaled twice at the U.S. Synchronized Skating Championships, and currently dabbles in ice dance. When he’s not exploring the world as much as possible, A. J. lives in the San Francisco Bay Area with his boyfriend and two cats who act like dogs. Ana on the Edge is his first novel.