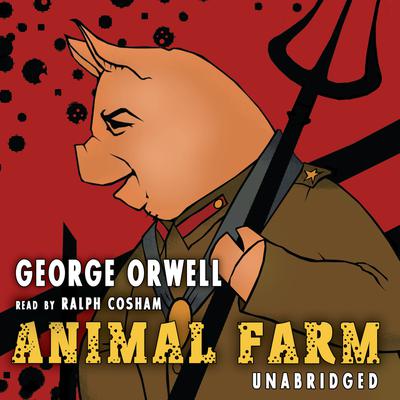 George Orwell’s classic satire of the Russian Revolution has become an intimate part of our contemporary culture, with its treatment of democratic, fascist, and socialist ideals through an animal fable.

The animals of Mr. Jones’s Manor Farm are overworked, mistreated, and desperately seeking a reprieve. In their quest to create an idyllic society where justice and equality reign, the animals of Manor Farm revolt against their human rulers, establishing the democratic Animal Farm under the credo, “All Animals Are Created Equal.” Out of their cleverness, the pigs—Napoleon, Squealer, and Snowball—emerge as leaders of the new community. In a development of insidious familiarity, the pigs begin to assume ever greater amounts of power, while other animals, especially the faithful horse Boxer, assume more of the work. The climax of the story results in a brutal betrayal, when totalitarian rule is reestablished with the bloodstained postscript to the founding slogan: “But Some Animals Are More Equal than Others.”

This astonishing allegory, one of the most scathing satires in literary history, remains as fresh and relevant as the day it was published.

“There is a timeless, even transcendent quality to this little story.” —Christopher Hitchens, New York Times bestselling author
“A wise, compassionate, and illuminating fable of our times…The steadiness and lucidity of Orwell’s merciless wit are reminiscent of Anatole France and even of Swift.” —New York Times Book Review
“Absolutely first-rate…comparable to Voltaire and Swift.” —New Yorker
“Animal Farm is a nearly perfect piece of writing, both an engaging story and an allegory that actually works.” —Amazon.com
“A modern day fable, with modern implications in a deceiving simplicity…Orwell’s animals exist in their own right, with a narrative as individual as it is apt in political parody.” —Kirkus Reviews
“Animal Farm ought to resonate because it’s about the beguiling lure of messages that tell you they have answers…A very pertinent book for protecting you against making the small concessions towards being cruel or unfair or accepting injustice.” —Jean Seaton, professor of media history at the University of Westminster and the director of the Orwell Foundation