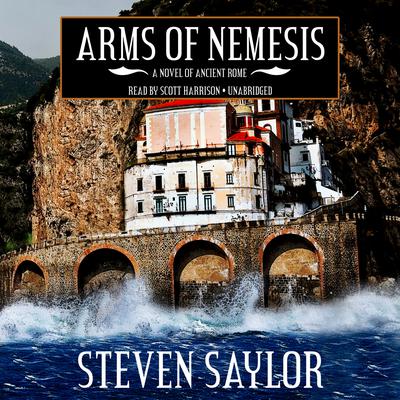 Arms of Nemesis: A Novel of Ancient Rome

South of Rome on the Gulf of Puteoli stands the splendid villa of Marcus Crassus, Rome’s wealthiest citizen. When the estate overseer is murdered, Crassus concludes that the deed was done by two missing slaves, who have probably run off to join the Spartacan Slave Revolt. Unless they are found within three days, Crassus vows to massacre his remaining ninety-nine slaves.

To Gordianus the Finder falls the fateful task of resolving this riddle from Hades. In a house filled with secrets, the truth is slow to emerge. And as the hour of the massacre approaches, Gordianus realizes that the labyrinthine path he has chosen may just lead to his own destruction.

Steven Saylor is a freelance writer, editor, and the author of novels set in ancient Rome. He studied history at the University of Texas at Austin. Saylor’s writing has appeared in the Threepenny Review, San Francisco Bay Guardian, Ellery Queen’s Mystery Magazine, and the Magazine of Fantasy and Science Fiction. He lives in Berkeley, California, and Austin, Texas.