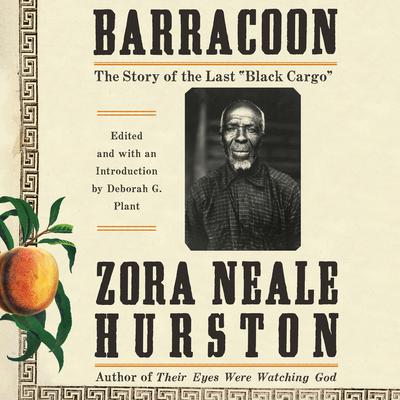 Barracoon: The Story of the Last "Black Cargo"

By Zora Neale Hurston
Edited and with an introduction by Deborah G. Plant
Read by Robin Miles

An Audible.com “Best of the Year” Finalist in History

An AudioFile Best Audiobook of the Year in Biography & History

A Parade Magazine Pick of the Summer's Nonfiction

A Paste Magazine Pick of the 10 Best Audiobooks of 2018

A PBS Pick of Books about Construction

A major literary event: a never-before-published work from the author of the American classic Their Eyes Were Watching God that brilliantly illuminates the horror and injustices of slavery as it tells the true story of one of the last known survivors of the Atlantic slave trade—abducted from Africa on the last "Black Cargo" ship to arrive in the United States.

In 1927, Zora Neale Hurston went to Plateau, Alabama, just outside Mobile, to interview eighty-six-year-old Cudjo Lewis. Of the millions of men, women, and children transported from Africa to America as slaves, Cudjo was then the only person alive to tell the story of this integral part of the nation’s history. Hurston was there to record Cudjo’s firsthand account of the raid that led to his capture and bondage fifty years after the Atlantic slave trade was outlawed in the United States.

In 1931, Hurston returned to Plateau, the African-centric community three miles from Mobile founded by Cudjo and other former slaves from his ship. Spending more than three months there, she talked in depth with Cudjo about the details of his life. During those weeks, the young writer and the elderly formerly enslaved man ate peaches and watermelon that grew in the backyard and talked about Cudjo’s past—memories from his childhood in Africa, the horrors of being captured and held in a barracoon for selection by American slavers, the harrowing experience of the Middle Passage packed with more than 100 other souls aboard the Clotilda, and the years he spent in slavery until the end of the Civil War.

Based on those interviews, featuring Cudjo’s unique vernacular, and written from Hurston’s perspective with the compassion and singular style that have made her one of the preeminent American authors of the twentieth-century, Barracoon brilliantly illuminates the tragedy of slavery and of one life forever defined by it. Offering insight into the pernicious legacy that continues to haunt us all, black and white, this poignant and powerful work is an invaluable contribution to our shared history and culture.

“Zora Neale Hurston’s genius has once again produced a Maestrapiece.” —Alice Walker, Pulitzer Prize winner and New York Times bestselling author
“An impactful story that will stick with you long after the final page.” —Parade
“Though both Hurston and Lewis are long gone, Hurston’s account of the former slave’s life serves as a timely reminder of our shared humanity—and the consequences that can occur if we forget it.” —People
“The details he shared with Hurston are indelible…[In] Hurston’s attentive gaze [there is] not restitution but the consolations of kinship and witness.” —New York Times Book Review
“Hurston’s recovered masterpiece, Barracoon, is a stunning addition to several overlapping canons of American literature…[Hurston] makes herself almost invisible in this book, dedicating entire chapters to Kossola’s monologues, with few authorial interventions.” —Washington Post
“Barracoon and its long path to print is a testament to Zora’s singular vision amid so many competing pressures that continue to put us at war with ourselves.” —Huffington Post
“Kossula’s story reminds us that Emancipation did not end those assaults on the communities and families of African Americans but rather enabled their continuation through other means.” —The Nation
“A remarkable account…whose brevity disguises its richness and depth…Kossola’s story—in the vernacular of his own words—is an invaluable addition to American social, cultural, and political history.” —Publishers Weekly (starred review)
“Capturing the dialect, accent, and intonation of Cudjo Lewis, then living in Alabama, presents a challenging task for narrator Robin Miles, who must deliver one of the integral aspects of Hurston’s work: a reconstruction of Lewis’ African and Southern accents. Miles’ rendition is well done, with clear, deliberate diction that places appropriate emphasis on Lewis’ emotional reactions. Also included is an introduction to Hurston’s work. Traditional music at transition points sets the mood of the rural South. Winner of the AudioFile Earphones Award.” —AudioFile
“This is a rare account of the full experience of enslavement from capture to ‘freedom’ and a revealing look at Hurston’s maturing as a folklorist.” —Library Journal
“A testament to the enormous losses millions of men, women, and children endured in both slavery and freedom—a story of urgent relevance to every American, everywhere.” —Tracy K. Smith, Pulitzer Prize–winning author
“[Hurston] was determined to present Kossola’s story in as authentic a manner as possible. That authenticity includes rendering his words in patois…That mark of the griot, or West African traditional storyteller, is evident as Kossola recounts moments of resistance…We are fortunate to have this late work of Hurston’s, which is sure to be widely read. —Kirkus Reviews
“A man who lived across one century and two continents, Kossola’s life was marked, repeatedly and relentlessly, by loss: of his homeland, of his humanity, of his given names, of his family. For decades, his full story, from his perspective and in his voice, was also lost, but with the publication of Barracoon, it is rightfully restored.” —Smithsonian
“Barracoon is a testament to [Zora’s] patient fieldwork.” —Vulture
“Brimming with observational detail from a man whose life spanned continents and eras, the story is at times devastating, but Hurston’s success in bringing it to light is a marvel.” —NPR
“His story, documented by Hurston in Lewis’ specific vernacular, is performed here by audiobook great Robin Miles, who not only nails the accents but strikes the exact balance between the warmth in Hurston’s internal narration and the conversational eccentricities of her spoken conversations with Lewis. A new Zora Neale Hurston book is something that by definition never happens, so don’t sleep on this necessary, entertaining listen.” —Paste Magazine (audio review)

Zora Neale Hurston (1891–1960) was a novelist, folklorist, and anthropologist whose fictional and factual accounts of black heritage remain unparalleled. In addition to her most celebrated work, the 1937 novel Their Eyes Were Watching God, her books include Barracoon, a New York Times bestseller.