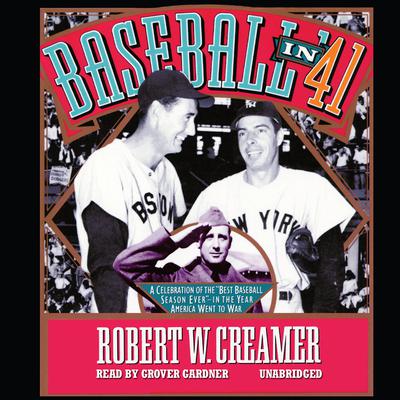 Baseball in ’41: A Celebration of the “Best Baseball Season Ever”—In the Year America Went to War

It was the year that Joe DiMaggio set his 56-game hitting streak, that Ted Williams batted .406, that the Dodgers and the Yankees battled each other in a classic World series—and that the United States went to war.

In this look at what he calls "the best baseball season ever," Robert Creamer skillfully intertwines all these epochal baseball happenings with an informal history of a pivotal period in American life, as well as with his own memories of what it was like to be eighteen and a baseball fan when the game he loved vied for his attention with a looming war.

For all who love baseball, Baseball in '41 makes it clear why the game is still the purest representation of the American Dream.

“A memorable book.” —New York Times
“This is a baseball book, but whether Creamer intended it or not, it’s much, much more.” —Sports Illustrated
“A thoroughly agreeable and digressive trip down memory lane with a lifelong fan of the national pastime…the author displays touches of real class in his blow-by-blow account of a glorious time…An evocative delight for nostalgia buffs as well as devotees of the diamond game and its storied past.” —Kirkus Reviews

Robert W. Creamer is an American sportswriter and editor. He was one of the first hired on the staff of Sports Illustrated in 1954 and served the magazine as a senior editor until 1984. Also an accomplished author, he wrote the most definitive biography of Babe Ruth, entitled Babe, in 1974.