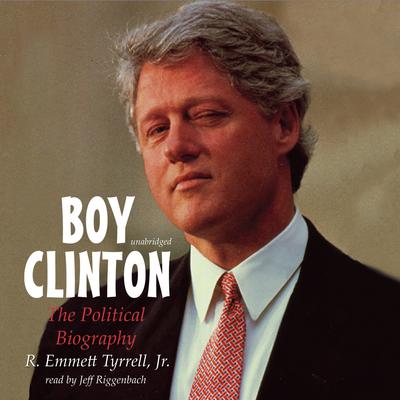 R. Emmett Tyrrell, Jr., editor-in-chief of The American Spectator, traces the formative influences on the young, fatherless Clinton by the hustlers and rogues who populated his boyhood hometown of Hot Springs, Arkansas. Tyrrell shows how the influence-peddlers who dominated Arkansas politics served as Clinton’s real political models, and explains how these factors combined with Clinton’s ’60s-era radicalism to create a new, more dangerous type of career politician.

With dozens of fresh revelations about both Bill and Hillary Clinton, Tyrrell sheds important new light on their activities in Arkansas and Washington. Tyrrell also draws together the overwhelming evidence—enough to convict any lesser citizen—that the Clintons are guilty of tax fraud, obstruction of justice, and lying to government agencies.

“Already the H. L. Mencken of the end of the century, Bob Tyrrell now calls on Lincoln Steffens.”  —Tom Wolfe
“Outrageous…extremely funny…a coherent narrative about a bizarre political career and the forces which helped create it.” —Washington Times

R. Emmett Tyrrell, Jr., author of Madame Hillary, is founder and editor in chief of the American Spectator. His previous books include the New York Times bestseller Boy Clinton, The Impeachment of William Jefferson Clinton, The Liberal Crack-Up, The Conservative Crack-Up, Public Nuisances, and The Future that Doesn’t Work: Social Democracy’s Failure in Britain. A nationally syndicated columnist, his articles have appeared in the Wall Street Journal, New York Times, Los Angeles Times, Baltimore Sun, Washington Times, National Review, Harper’s Commentary, The Spectator (London), Le Figaro (Paris), and elsewhere. He is also an adjunct fellow of the Hudson Institute and a contributing editor to the New York Sun.