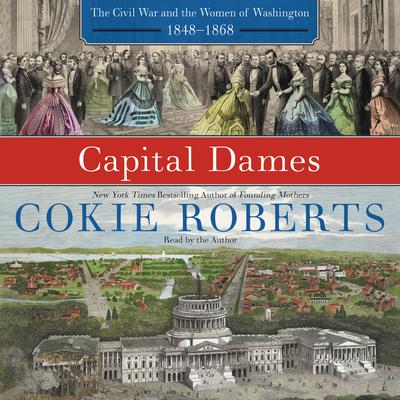 In this engrossing and informative companion to her New York Times bestsellers Founding Mothers and Ladies of Liberty, Cokie Roberts marks the sesquicentennial of the Civil War by offering a riveting look at Washington, D.C. and the experiences, influence, and contributions of its women during this momentous period of American history.

With the outbreak of the Civil War, the small, social Southern town of Washington, D.C. found itself caught between warring sides in a four-year battle that would determine the future of the United States.

After the declaration of secession, many fascinating Southern women left the city, leaving their friends—such as Adele Cutts Douglas and Elizabeth Blair Lee—to grapple with questions of safety and sanitation as the capital was transformed into an immense Union army camp and later a hospital. With their husbands, brothers, and fathers marching off to war, either on the battlefield or in the halls of Congress, the women of Washington joined the cause as well. And more women went to the Capital City to enlist as nurses, supply organizers, relief workers, and journalists. Many risked their lives making munitions in a highly flammable arsenal, toiled at the Treasury Department printing greenbacks to finance the war, and plied their needlework skills at The Navy Yard—once the sole province of men—to sew canvas gunpowder bags for the troops.

Cokie Roberts chronicles these women's increasing independence, their political empowerment, their indispensable role in keeping the Union unified through the war, and in helping heal it once the fighting was done. She concludes that the war not only changed Washington, it also forever changed the place of women.

Sifting through newspaper articles, government records, and private letters and diaries—many never before published—Roberts brings the war-torn capital into focus through the lives of its formidable women.

“Roberts is a gifted narrator of Civil War history, weaving the experiences and perspectives of the women into a fresh and illuminating account of key battles and events.” —Washington Post
“An engaging narrative….Roberts documents the struggles of many women to overcome their second-class status.… [she] does not ignore the experiences of ‘ordinary’ women.” —Philadelphia Inquirer
“Helping to reverse…cultural ignorance in American history…Roberts again combines her historical interest and long personal knowledge of Washington politics… [and] unearths the important and unique role of women during the US Civil War.” —Christian Science Monitor
“Listeners will enjoy the diverse information packed into this well-done audiobook…Her ability to weave information from letters, diaries, and newspapers into a coherent and sometimes humorous whole is marvelous. She showcases the women of the Confederacy, who without legal power, managed to get their husbands better prison accommodations and, in one case, freed from prison using only wit, cunning, and persistence as their weapons. Roberts’ pride in these women is clearly expressed in her voice. She exults in their courage. Whether listeners are from the North or South, all will appreciate this first-rate women’s history. Winner of the AudioFile Earphones Award.” —AudioFile
“Another splendid female-centric slice of history…Roberts illuminates how the harsh realities of the war changed the course of individual lives and permanently altered the course of American women’s history.” —Booklist

Cokie Roberts (1943–2019) was an American journalist, a political commentator, senior news analyst, and bestselling author. She had been cited as one of the fifty greatest women in the history of broadcasting by the American Women in Radio and Television.She won the Edward R. Murrow Award, the Everett McKinley Dirksen Award for coverage of Congress, and a 1991 Emmy Award for her contribution to Who Is Ross Perot? In 2000, she won the Walter Cronkite Award for Excellence in Journalism. She and her mother, Lindy, won the Foremother Award from the National Center for Health Research in 2013. She was inducted into the Broadcasting & Cable Hall of Fame in 2000.