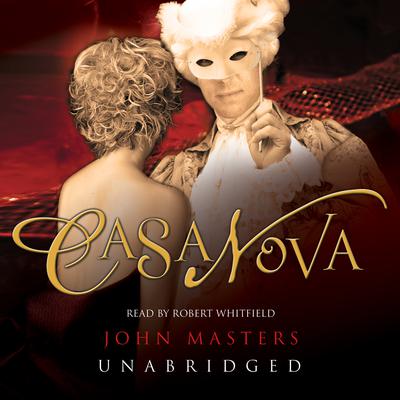 Giacomo Casanova’s reputation rests largely on his obsession with women, but he was much more than the great eighteenth-century lover. Lawyer, mathematician, poet, translator, and librarian who was fluent in several languages, he was described by one contemporary as “the most civilized man in Europe.” That he was also a con man, cabalist, spy, revenge-taker, and experienced prisoner only enhances his appeal as one who personified the extreme social and moral contradictions of the time.

In chronicling the life of this bastard son of Venetian actors, Masters draws from Casanova’s own highly expansive memoirs, unavailable until the 1960s, and shows that many of the most racy and unlikely events in his adventure-filled life story have been corroborated by fact.

“Robert Whitfield offers a spirited reading of Masters’ detailed biography, bringing a lively sense of fun to the tale. His performance maintains the scholarly authority of careful research, but he clearly enjoys having an outrageous tale to tell…Through subtle changes in tempo and mood, Whitfield accurately captures both the spirit of Casanova and the integrity of the author.” —AudioFile

John Masters, who was born in Calcutta in 1914, was of the fifth generation of his family to have served in India.  Educated at Wellington and Sandhurst, he returned to India in 1934 to join the 4th Prince of Wales’ Own Gurkha Rifles. He saw service in Waxiristan in 1937 and, after the outbreak of war, in Iraq, Syria and Persia. In 1944, he commanded a brigade of General Wingate’s Chindits in Burma, and later fought with the 19th Indian Division at the capture of Mandaly and on the Mawchi Road. Masters retired from the army in 1948 as a lieutenant colonel with the DSO and OBE. He went to America and turned to writing. He is best known for his novels, published by Sphere Books Ltd, most famously Bhowani Junction. John Masters died in New Mexico in May 1983, at the age of sixty-eight.