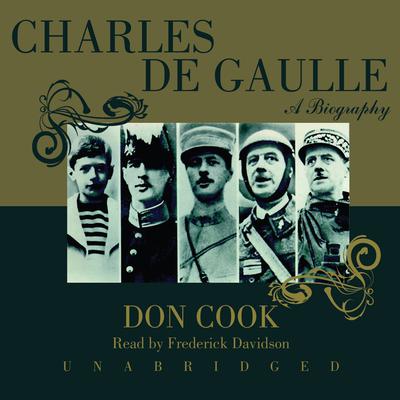 This magnificent volume by veteran European correspondent Don Cook is the first major biography of de Gaulle written by an American from an American perspective. Rich with new anecdotal material, it offers fresh evaluations and sheds new light on Europe’s most controversial and enigmatic general, politician, and statesman.

Arrogant, haughty, single-minded in war, politics, and his personal life, Charles de Gaulle ranks in many ways as the most powerful personality of an epoch blessed—or cursed—with powerful men. Hitler, Churchill, Roosevelt, Stalin, Truman, Kennedy, and Khrushchev all locked horns with de Gaulle, and all eventually bowed to his wishes.

This exciting biography takes full measure of the man and his times, when great soldiers and statesmen fought center stage and the fate of the world hung in the balance.

“Splendid…No one has done a better job in painting the real de Gaulle…In its sensitivity, its grip of men and movement, its penetration, this is an outstanding biography. Don Cook has done all interested in the history of this strident century a great service.” —New York Times
“A robust, unsentimental biography…De Gaulle’s career may have been an ordeal for his contemporaries, but in Cook’s hands it has become a delight for readers.” —Time

Don Cook (1920–1995) was a celebrated European correspondent for the Los Angeles Times and the New York Herald Tribune for over forty years. He was the author of six books, including Charles de Gaulle, which was called “an outstanding biography” by the New York Times.