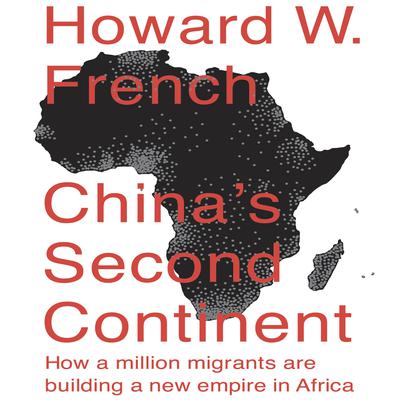 China's Second Continent: How a Million Migrants Are Building a New Empire in Africa

A Publishers Weekly Pick of the Week, May 2014

An exciting, hugely revealing account of China’s burgeoning presence in Africa—a developing empire already shaping, and reshaping, the future of millions of people. A prizewinning foreign correspondent and former New York Times bureau chief in Shanghai and in West and Central Africa, Howard French is uniquely positioned to tell the story of China in Africa. Through meticulous on-the-ground reporting—conducted in Mandarin, French, and Portuguese, among other languages—French crafts a layered investigation of astonishing depth and breadth as he engages not only with policy-shaping moguls and diplomats, but also with the ordinary men and women navigating the street-level realities of cooperation, prejudice, corruption, and opportunity forged by this seismic geopolitical development. With incisiveness and empathy, French reveals the human face of China’s economic, political, and human presence across the African continent—and in doing so reveals what is at stake for everyone involved. We meet a broad spectrum of China’s dogged emigrant population, from those singlehandedly reshaping African infrastructure, commerce, and even environment (a self-made tycoon who harnessed Zambia’s now-booming copper trade; a timber entrepreneur determined to harvest the entirety of Liberia’s old-growth redwoods), to those just barely scraping by (a sibling pair running small businesses despite total illiteracy; a karaoke bar owner–cum–brothel madam), still convinced that Africa affords them better opportunities than their homeland. And we encounter an equally panoramic array of African responses: a citizens’ backlash in Senegal against a “Trojan horse” Chinese construction project (a tower complex to be built over a beloved soccer field, which locals thought would lead to overbearing Chinese pressure on their economy); a Zambian political candidate who, having protested China’s intrusiveness during the previous election and lost, now turns accommodating; the ascendant middle class of an industrial boomtown; African mine workers bitterly condemning their foreign employers, citing inadequate safety precautions and wages a fraction of their immigrant counterparts’. French’s nuanced portraits reveal the paradigms forming around this new world order, from the all-too-familiar echoes of colonial ambition—exploitation of resources and labor; cut-rate infrastructure projects; dubious treaties—to new frontiers of cultural and economic exchange, where dichotomies of suspicion and trust, assimilation and isolation, idealism and disillusionment are in dynamic flux. Part intrepid travelogue, part cultural census, part industrial and political exposé, French’s keenly observed account ultimately offers a fresh perspective on the most pressing unknowns of modern Sino-African relations: why China is making the incursions it is, just how extensive its cultural and economic inroads are, what Africa’s role in the equation is, and just what the ramifications for both parties—and the watching world—will be in the foreseeable future.

“The huge and growing ties between China and the African continent will be one of the most crucial relationships of the twenty-first century, and you simply could not invent a better guide to it than Howard French. Superbly written, rich in anecdote, insight, and a sense of the immense scale of what is happening, China’s Second Continent should be mandatory reading for anyone wanting to understand how our world is being reshaped.” —Adam Hochschild, New York Times bestselling author of To End All Wars
“Extraordinary…French delves into the lives of some of the one-million-plus Chinese migrants he says are now building careers in Africa…And the stories French tells are fascinating.” —New York Times Book Review
“Since Jiang Zemin’s state visit to Africa in 1996 and his subsequent call to Chinese businesses to ‘go out’ in search of opportunities abroad, China’s trade with Africa has grown dramatically, today surpassing its trade with either Europe or the US. But China’s investments, including massive building projects, are less significant for this rapidly evolving relationship…than the significant flow of new Chinese immigrants—often pushed out by the pressure and oppression back home as much as lured by opportunity. In vivid first-person reportage, French explores this momentous phenomenon, while challenging assumptions about China and Chinese immigrants.” —Publishers Weekly
“Former New York Times bureau chief in Africa and China, French has traveled extensively in sub-Saharan Africa. Spending time in fifteen countries, he sought to understand China’s ties to Africa through the experiences of Chinese migrants and long-term residents…With candor, French shows the sometimes shocking racism of the Chinese toward Africans but also toward Chinese from different regions. China is emerging as a major player in the global economy, and Africa’s future may well be determined by its relationship with China. The author makes it easy to see imperialistic attitudes common in development of the West being played out on the African stage.” —Library Journal
“Although several recent books have discussed…China’s recent incursions into Africa in pursuit of resources and profit,…French has the advantage of significant personal experience in both Africa and China….Interacting with Chinese and Africans in Mozambique, Sierra Leone, Namibia, and elsewhere, French capably illustrates that although Chinese omnipresence in Africa may be a form of soft imperialism, it is also a result of the crushing pressures—lack of space, merciless business competition, pollution—of modern Chinese society.” —Booklist

Howard W. French is an associate professor at the Columbia University Graduate School of Journalism, where he has taught both journalism and photography since 2008. For many years, he was a senior writer for the New York Times, where he spent most of a nearly twenty-three year career as a foreign correspondent, working in and traveling to over 100 countries on five continents. French is the recipient of two Overseas Press Club Awards and a two time Pulitzer Prize nominee.