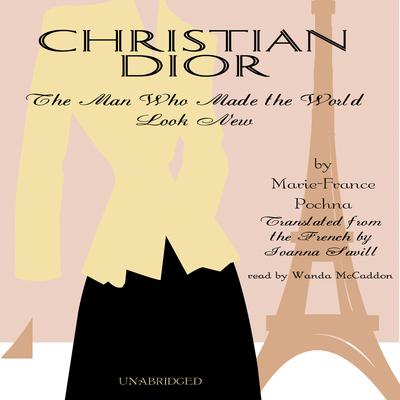 Christian Dior: The Man Who Made the World Look New

Christian Dior's career, a veritable fairy tale, is set in a rich tapestry of Paris cultural life before, during, and after the war. Much of Dior's daily inspiration emanated from the world of the intellectual and artistic elite, in which he moved with such people as Erik Satie, Francis Poulenc, Henry Sauguet, Jean Cocteau, and Raoul Dufy.

Born at the end of an era in which luxury seemed reserved only for the happy few, Dior again revolutionized the world of fashion by introducing, in the early 1950s, "ready-to-wear" in his Dior Boutique. Until then, couturiers had worked essentially if not exclusively for the very rich and famous. With his boutique, Dior brought high fashion to the world at large. In celebration of the fiftieth anniversary of the "New Look," New York's Metropolitan Museum mounted a major Dior retrospective in the winter of 1996–97.

“He was witty, sophisticated and intelligent; [Wanda McCaddon] reads in the same mode. Her performance is smooth and effortless; her diction is perfect, and she glides through the plethora of French names and phrases with alacrity…a vivid portrait of one of the biggest names in haute couture.” —AudioFile
“Pochna uses the present-tense and lots of exclamation points to re-create the excitement of the debut showing, when the world first saw his tight bodices, wasp waists, and skirts made of 40 yards of material.” —Kirkus Reviews

Marie-France Pochna is a biographer and ghost writer specializing in the worlds of industrialists as well as high fashion. Her previous books include biographies of the Italian magnate Gianni Agnelli and the fashion designer Nina Ricci. She divides her time between Paris and New York.