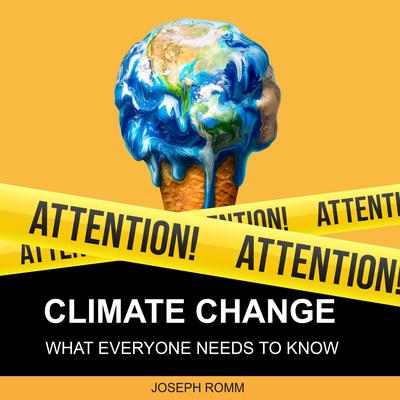 Climate Change: What Everyone Needs to Know

The What Everyone Needs to Know Series

From Joseph Romm, Chief Science Advisor for National Geographic's Years of Living Dangerously series and one of Rolling Stone's "100 people who are changing America," Climate Change offers user-friendly, scientifically rigorous answers to the most difficult (and commonly politicized) questions surrounding what climatologist Lonnie Thompson has deemed "a clear and present danger to civilization."

New questions about climate change addressed in this guide include:

● Analysis of the Paris climate agreement, including the United States' withdrawal

● Implications of the clean energy revolution, from solar and wind power to batteries and electric cars

● The latest on climate science, including updates on efforts to stem or slow climate change

As the global response to climate change continues to evolve, Climate Change: What Everyone Needs to Know® offers smart, unbiased answers to the most difficult questions in an area dogged by misunderstanding and politicization.

“The best single-source primer on the state of climate change.” —New York magazine

Joseph Romm, PhD, is one of the country’s most influential communicators on climate science and solutions. Romm is Chief Science Advisor for the Years of Living Dangerously series, which won the 2014 Emmy Award for Outstanding Nonfiction Series. He is the founding editor of Climate Progress, which New York Times columnist Tom Friedman called “the indispensable blog.” In 2009, Time named Romm one of its “Heroes of the Environment,” calling him “The Web’s most influential climate-change blogger.” In 2009, Rolling Stone put him on its list of 100 “people who are reinventing America.” Romm was acting assistant secretary of energy in 1997, where he oversaw one billion dollars in low-carbon technology development and deployment. He is a Senior Fellow at the Center for American Progress and holds a PhD in physics from MIT.