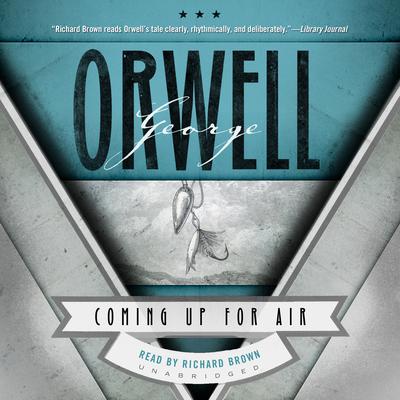 Coming Up for Air

George Bowling, an insurance salesman, hits middle age and feels impelled to "come up for air" from his life of quiet desperation. With seventeen pounds he has won at a race, he steals a vacation from his wife and his family and pays a visit to Lower Binfield, the village where he grew up, to fish for carp in a pool he remembers from thirty years before. But the pool is gone, Lower Binfield has changed beyond recognition, and the principal event of Bowling's holiday is an accidental bombing by the RAF.

Bowling's everyman life is also a sort of cavalcade of England from 1893 to 1938. Written when the clouds of World War II were already gathering, this story of Bowling's journey into his own and his country's past is told with humor, warmth, and nostalgia which will surprise and delight George Orwell's many readers.

“A charming, cheerful, minor masterpiece.” —New York Times
“By any standards, a work of rare vigor and imagination…Confirms one’s estimate of Mr. Orwell as a major prophet among the world’s still lively minority of thinking men.” —New York Herald Tribune Book Review
“Richard Brown reads Orwell’s tale clearly, rhythmically, and deliberately.” —Library Journal
“Offers a nostalgic, sincere appreciation of a way of life that can never be again, and will prove something new for his followers.” —Kirkus Reviews