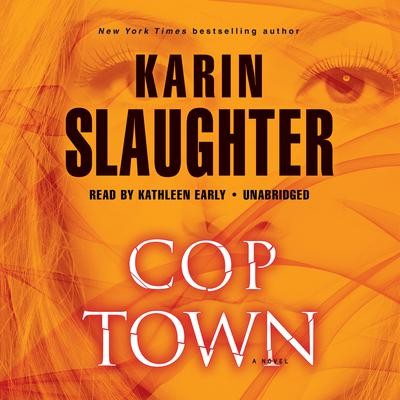 One of Barnes & Noble's Biggest Books for June 2014

Nominated for the 2015 Edgar Allan Poe Award for Best Novel

An AudioFile Best Book of the Year for 2014

The critically acclaimed and New York Times bestselling master of suspense delivers her first stand-alone novel, a thrilling tale of crime and struggle set in Atlanta in the mid-1970s.

Atlanta, 1974. It’s Kate Murphy’s first day on the job, and the Atlanta Police Department is seething after the murder of an officer. Before the day has barely begun, she already suspects she’s not cut out to be a cop. Her male uniform is too big, she can’t handle a gun, and she’s rapidly learning that the APD is hardly a place that welcomes women. Worse still, in the ensuing manhunt, she’ll be partnered with Maggie Lawson, a cop with her own ax to grind (and a brother and uncle already on the force)—a strategy meant to isolate Kate and Maggie from the action. But the move will backfire, putting them right at the heart of it.

Cop Town is an incredibly atmospheric nail-biter from the author the Huffington Post called an “exemplary storyteller” and “one of the great talents of the twenty-first century.”

“Sly…compulsively readable…[One of] the summer’s best thrillers.” —O, The Oprah Magazine
“Once again [Slaughter] pulls her readers into a twisted tale of mystery and keeps them fascinated from start to finish.” —Huffington Post
“Kathleen Early is no stranger to Karin Slaughter’s work. With each subsequent book she narrates, her ease with Slaughter’s worlds seems to deepen. In this most recent release, an array of Southern women pulls Early’s strengths front and center…Early depicts the male roles with an equal strength and emphasizes Slaughter’s sharp humor. Cop Town is a celebration of pioneering women in law enforcement, and Early is hosting the party. Winner of an AudioFile Earphones Award.” —AudioFile
“Intense…engrossing…evocative…A gritty, action-packed plot and strong, believable characters.” —Associated Press
“With edge-of-your-seat suspense and a riveting plot, this is a top-notch story.” —RT Book Reviews (4½ stars)
“[A] riveting story…Her characters, plot, and pacing are unrivaled among thriller writers.” —Michael Connelly, #1 New York Times bestselling author
“Relentless pacing, complex characters, and gritty realism, all set against the backdrop of a city on the edge. Slaughter’s eye for detail and truth is unmatched.” —Gillian Flynn, #1 New York Times bestselling author
“Unforgettable female characters and stunning evocation of time and place make Cop Town one of the most powerful and moving reads of recent memory.” —Kathryn Stockett, New York Times bestselling author
“A superb, very gritty look at both a city and era in social and political flux. It’s also a searing portrait of family ties and how our pasts can shape our futures, as well as a gripping procedural, with some genuinely terrifying moments. Kate and Maggie are wonderful creations.” —Library Journal (starred review)
“Winning leads, the retro setting, and a riveting plot make this one of Slaughter’s best.” —Booklist (starred review)
“Violent crime, police politics, and race relations all figure in this scintillating standalone…Slaughter does her usual fine job of exploring intriguingly troubled characters.” —Publishers Weekly
“A gritty procedural in which the streets of 1970s Atlanta are just as dangerous for cops as for criminals…There’s nothing pretty about this divided cop town, but in exposing its ugliness, Slaughter forces us to question whether times really have changed.” —Kirkus Reviews
“One of the most brutally realistic books that I have read in recent memory; Slaughter’s literary talents are given full rein here, and the results are stunning. Cop Town is one of this year’s must-read books.” —Bookreporter.com

Karin Slaughter is the New York Times and #1 internationally bestselling author of over a dozen thrillers, including the Will Trent and Grant County series. A longtime resident of Atlanta, she splits her time between the kitchen and the living room.