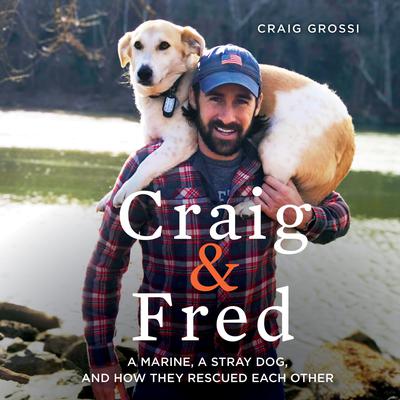 Craig & Fred: A Marine, A Stray Dog, and How They Rescued Each Other

The uplifting and unforgettable true story of a US Marine, the stray dog he met on an Afghan battlefield, and how they saved each other and now travel America together, "spreading the message of stubborn positivity."

In 2010, Sergeant Craig Grossi was doing intelligence work for Marine RECON—the most elite fighters in the Corps—in a remote part of Afghanistan. While on patrol, he spotted a young dog "with a big goofy head and little legs" who didn’t seem vicious or run in a pack like most strays they’d encountered. After eating a piece of beef jerky Craig offered—against military regulations—the dog began to follow him. "Looks like you made a friend," another Marine yelled. Grossi heard, "Looks like a 'Fred.'" The name stuck, and a beautiful, life-changing friendship was forged.

Fred not only stole Craig’s heart; he won over the RECON fighters, who helped Craig smuggle the dog into heavily fortified Camp Leatherneck in a duffel bag—risking jail and Fred’s life. With the help of a crew of DHL workers, a sympathetic vet, and a military dog handler, Fred eventually made it to Craig’s family in Virginia.

Months later, when Craig returned to the U.S., it was Fred’s turn to save the wounded Marine from Post-Traumatic Stress. Today, Craig and Fred are touching lives nationwide, from a swampy campground in a Louisiana State Park to the streets of Portland, Oregon, and everywhere in between.

A poignant and inspiring tale of hope, resilience, and optimism, with a timeless message at its heart—"it is not what happens to us that matters, but how we respond to it"—Craig & Fred is a shining example of the power of love to transform our hearts and our lives.

“Their story of mutual rescue is inspiring and also enlightening. Grossi, a talented storyteller, gives a sense of immediacy to the combat scenes and to the everyday slog that comes from going out on nighttime patrols…Fred’s story highlights the nature of resiliency, courage, and the strength of the bond between man and dog.” —Bark magazine
“Offers a narrative look at how soldiers adjust when they return from combat…Grossi recounts his efforts to heal from his wartime experiences while traversing the US, dog in tow.” —Publishers Weekly
“A book about discovering Fred and just how important the little pup was to him during his time serving the country.” —CBS Miami
“Many veterans feel isolated upon returning home, finding it difficult to readjust to civilian life. A friendly question, ‘What kind of dog is that?’ provides an opening for Grossi, a marine veteran, to discuss his experiences in the military and at war…The book intersperses the stories of Grossi’s military career, his relationship with Fred, and their road trip across the United States.” —School Library Journal

Craig Grossi, the author of Craig & Fred and Second Chances, is an eight-year Marine Corps veteran and a recipient of the Purple Heart. After returning from Afghanistan, he worked for the Defense Intelligence Agency and attended Georgetown University. When not traveling with his rescue dog Fred, he works intensively with veteran organizations, including the USA Warriors Ice Hockey Program and the Tragedy Assistance Progams for Survivors. Find him online at www.fredtheafghan.com.