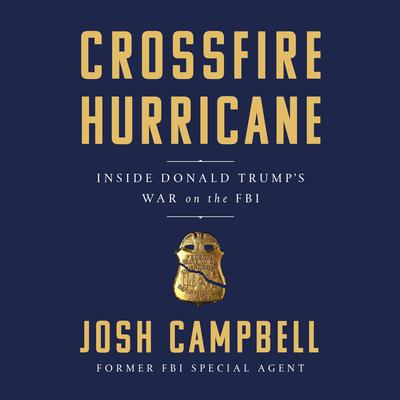 Crossfire Hurricane: Inside Donald Trump's War on the FBI

From an FBI insider, a riveting, fly-on-the-wall account of the historic investigation into the Trump campaign's ties to Russia and the president's unprecedented attacks on the bureau—and a passionate defense of the men and women who work every day to uphold democratic institutions and the rule of law.

Titled after the FBI code name for the initial investigation into the Trump campaign's ties to Russia, Crossfire Hurricane chronicles President Trump's relentless attacks on the FBI. Josh Campbell, a career special agent who served under Presidents George W. Bush, Barack Obama, and Donald J. Trump before resigning from the FBI in February 2018, takes listeners behind the scenes of the Russia investigation's earliest days and makes a compelling case that Trump's campaign of attack poses a threat to public safety.

Campbell, who has twelve years' experience working on some of the FBI's highest-profile operations and is now a national security expert for CNN, was special assistant to James Comey. Using a combination of firsthand experience and reporting from sources still within the Bureau, he offers an inside perspective into the FBI that will captivate listeners struggling to make sense of a news cycle careening out of control.