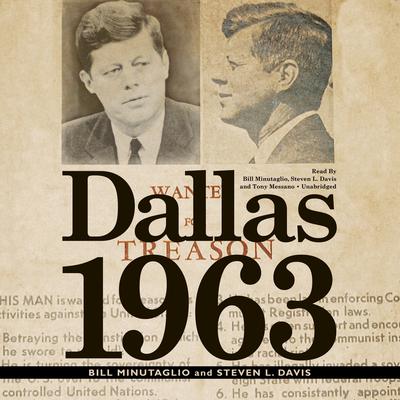 Dallas 1963: Politics, Treason, and the Assassination of JFK

An Amazon Best Books of the Year for 2013 in History

One of Parade Magazine’s Top Books about John F. Kennedy

One of Kirkus Reviews’ Best Books in 2013 for Nonfiction

In the early 1960s, Dallas was brewing with political passions and full of extreme and unlikely characters, many of them dead set against a Kennedy presidency—rabid politicos like defrocked military general Edwin A. Walker; oil baron H. L. Hunt; W. A. Criswell, leader of the largest Baptist congregation in the world; and fanatical congressman Bruce Alger; along with a host of gangsters, unsung civil rights leaders, strippers, billionaires, and marauding police. Beginning with the campaign for Kennedy's election and set against a nation in transition, Bill Minutaglio and Steven L. Davis ingeniously explore the swirling forces that led numerous friends and aides to warn the president against stopping in Dallas on his fateful trip to Texas.

Breathtakingly paced, this book presents a clear, cinematic, and revelatory look at the twentieth century's most significant and terrifying political event. Published to coincide with the fiftieth anniversary of the Kennedy assassination, Dallas 1963 is not only a fresh look at a momentous political tragedy but a sobering reminder of how radical ideology turns ordinary Americans extraordinarily violent.

“All the great personalities of Dallas during the assassination come alive in this superb rendering of a city on a roller coaster into disaster. History has been waiting fifty years for this book.” —Lawrence Wright, New York Times bestselling author of The Looming Tower and Going Clear
“The authors skillfully marry a narrative of the lead-up to the fateful day with portrayals of the Dixiecrats, homophobes, John Birchers, hate-radio spielers, and the ‘superpatriots’ who were symptomatic of the paranoid tendency in American politics.” —Harold Evans, New York Times bestselling author of The American Century
“Bill Minutaglio and Steven L. Davis’ Dallas 1963 is a brilliantly written, haunting eulogy to John F. Kennedy. By exposing the hatred aimed at our thirty-fifth president, the authors demonstrate that America—not just Lee Harvey Oswald—was ultimately responsible for his death. Every page is an eye-opener. Highly recommended!” —Douglas Brinkley, New York Times bestselling author of Cronkite
“In this harrowing, masterfully paced depiction of a disaster waiting to happen, Minutaglio and Davis examine a prominent American city in its now-infamous moment of temporary insanity. Because those days of partisan derangement look all too familiar today, Dallas 1963 isn’t just a gripping narrative—it’s also a somber cautionary tale.” —Robert Draper, New York Times bestselling author of Do Not Ask What Good We Do
“In Bill Minutaglio and Steven L. Davis’ electric, frightening urban political history Dallas 1963, the authors don’t need to draw parallels between the conservative panic that erupted during John F. Kennedy’s presidency and the fears currently inflaming the far right wing. It's all right there on the page…In clipped but striking prose, the book lays out a rogue's gallery of southern gothics twisted with the gnawing terror that their (white, Protestant, xenophobic) America was being torn away from them…What this book strongly suggests is that while words can’t kill, they can certainly help to pull the trigger.” —Barnes&Noble.com, editorial review
“After fifty years, it’s a challenge to fashion a new lens with which to view the tragic events of Nov. 22, 1963—yet Texans Minutaglio and Davis pull it off brilliantly. The assassination in Dealey Plaza marks the end of their thrilling story, which traces three years of increasing militant extremism in Dallas, beginning even before Kennedy’s election…The environment of hate is chillingly evoked…The venom makes the impending tragedy seem inevitable, and though others have made dramatic use of the prophetic statements from JFK himself, Senator Hubert Humphrey, and others just before the shooting, few have employed them to better effect.” —Publishers Weekly (starred review)
“This engrossing narrative vividly captures the tensions in the Kennedy-Dallas crucible from 1960 until the president’s death and will grip readers interested in the roots of Kennedy’s political challenges and his assassination.” —Library Journal (starred review)
“In a chronological, episodic narrative…Minutaglio and Davis unearth the various fringe elements rampant in Dallas in the three years (from January 1960 to November 1963) preceding John F. Kennedy’s assassination…The authors make a compelling, tacit parallel to today’s running threats by extremist groups.” —Kirkus Reviews
“Dallas 1963 masterfully describes the sociological and political forces that made the city a hotbed of reactionary activism…As authoritative as it is readable, Dallas 1963 is a significant addition to the JFK canon.” —BookPage
“Minutaglio and Davis capture in fascinating detail the creepiness that shamed Dallas in 1963.” —Gary Cartwright, author and contributing editor at Texas Monthly

Bill Minutaglio’s work has appeared in the New York Times, Esquire, Newsweek, Texas Monthly, Outside, and many other publications. He has worked for the Dallas Morning News, Houston Chronicle, and San Antonio Express-News and is the author of several critically acclaimed books, including biographies of President George W. Bush, Molly Ivins, and Alberto Gonzales. He also wrote City on Fire, a narrative retelling of the greatest industrial disaster in American history. He lives in Austin, Texas.

Steven L. Davis is the author of two highly praised books on Texas culture, and his work has appeared in Texas Monthly, Texas Observer, San Antonio Express-News, Southwestern American Literature, and Texas Books in Review. He is a longtime curator at the Wittliff Collections at Texas State University-San Marcos, which holds the literary papers of Cormac McCarthy, Sam Shepard, and many other writers. He grew up in Dallas and lives with his family in the Texas Hill Country.