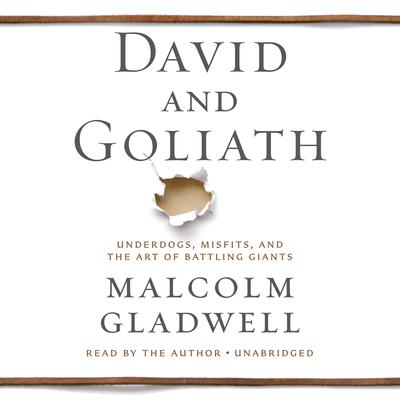 David and Goliath: Underdogs, Misfits, and the Art of Battling Giants

Winner of the 2014 Audie Award for Nonfiction

We all know that underdogs can win—that’s what the David versus Goliath legend tells us, and we’ve seen it with our own eyes. Or have we? In David and Goliath, Malcolm Gladwell, with his unparalleled ability to grasp connections others miss, uncovers the hidden rules that shape the balance between the weak and the mighty, the powerful and the dispossessed. Gladwell examines the battlefields of Northern Ireland and Vietnam, takes us into the minds of cancer researchers and civil rights leaders, and digs into the dynamics of successful and unsuccessful classrooms all in an attempt to demonstrate how fundamentally we misunderstand the true meaning of advantages and disadvantages. When is a traumatic childhood a good thing? When does a disability leave someone better off? Do you really want your child to go to the best school he or she can get into? Why are the childhoods of people at the top of one profession after another marked by deprivation and struggle?

“Pop-culture pundit Malcolm Gladwell is an idea blender, mixing concepts from vastly different sources (everything from business to science to the Bible) to produce new ways of seeing the world.” —Reader’s Digest
“Gladwell has made a career out of questioning conventional wisdom, and here he examines the allegedly unlikely triumph of the weak over the mighty and shows it’s not so unlikely after all. Four stars.” —People
“David and Goliath readers will travel with colorful characters who overcame great difficulties and learn fascinating facts about the Battle of Britain, cancer medicine, and the struggle for civil rights, to name just a few topics upon which Mr. Gladwell’s wide-ranging narrative touches. This is an entertaining book.” —Wall Street Journal
“Gladwell sells books by the millions because he is masterful at explaining how the world works—the power of critical mass, the arbitrariness of success, etc.—packaging his ideas in fun, accessible, and poignant vignettes.” —USA Today
“As always, Gladwell’s sweep is breathtaking and thought provoking.” —New York Times
“Truly intriguing and inspiring, especially when Gladwell discusses ‘desirable difficulties’...Gladwell’s account of the journey of Dr. Emil ‘Jay’ Freireich is unforgettable.” —Los Angeles Times
“Fascinating...Gladwell is a master of synthesis. This perennially bestselling author prides himself on radical re-thinking and urges the rest of us to follow suit.” —Washington Post
“What propels the book, like all of Gladwell’s writing, is his intoxicating brand of storytelling. He is the master of mixing familiar elements with surprise counter-intuitions and then seasoning with a sprinkling of scientific evidence....Gladwell is a master craftsman, an outlier amongst authors.” —Huffington Post
“Provocative....David and Goliath is a lean, consuming read...The book’s most crafty, engaging chapter ties together the Impressionist movement and college choices to highlight the fact that gaining admission to elite institutions, which we typically perceive as an advantage, is no guarantee of success.” —San Francisco Chronicle
“Engrossing...Gladwell’s singular gift is animating the experience of his subjects. He has an uncanny ability to simplify without being simplistic: clean and vivid Strunk and White prose in the service of peerless storytelling.” —Seattle Times
“Contemporary society can’t escape history when Malcolm Gladwell explains the world as he does with David and Goliath.” —St. Louis Post-Dispatch
“Gladwell’s most provocative book yet. David and Goliath challenges how we think about obstacles and disadvantages, drawing upon history, psychology, and powerful narrative talent to rethink how we view the world around us and how to deal with the challenges life throws at us.” —Columbus Dispatch
“The fifty-year-old Canadian is a superstar, the most popular staff writer on the New Yorker and a hero in the frequent-flier lounge where journalism, social science, business management, and self-help hang out....It’s a good story, and he’s got plenty more.” —Oregonian
“Gladwell’s bestsellers, such as The Tipping Point and Outliers, have changed the way we think about sociological changes and the factors that contribute to high levels of success. Here he examines and challenges our concepts of ‘advantage’ and ‘disadvantage’ in a way that may seem intuitive to some and surprising to others. Beginning with the classic tale of David and Goliath and moving through history with figures such as Lawrence of Arabia and Martin Luther King Jr., Gladwell shows how, time and again, players labeled ‘underdog’ use that status to their advantage and prevail through the elements of cunning and surprise…As usual, Gladwell presents his research in a fresh and easy-to-understand context.” —Booklist (starred review)
“A far- and free-ranging meditation on the age-old struggle between underdogs and top dogs…In addition to the top-notch writing one expects from a New Yorker regular, Gladwell rewards readers with moving stories, surprising insights, and consistently provocative ideas.” —Kirkus Reviews (starred review)
“Gladwell has long proven to be a capable narrator of his own books, and this production reflects his continued success. The work posits that personal obstacles may not always be detrimental—that they can, in fact, help some people outperform others. Gladwell steeps his research in interconnected anecdotes that require a good deal of storytelling, a structure that works well for audio. His vocal delivery commands the attention of listeners through tone, pacing, and well-placed pauses. At times, his delivery feels so natural and conversational that listeners can almost feel his presence in the room.” —AudioFile

Malcolm Gladwell has been a staff writer with the New Yorker since 1996. He is a former writer at the Washington Post and served as the newspaper’s New York City bureau chief. He has won a National Magazine Award, and in 2005 he was named one of Time magazine’s 100 Most Influential People. He is the author of four books: The Tipping Point: How Little Things Make a Big Difference, Blink: The Power of Thinking without Thinking, and Outliers: The Story of Success, all of which were #1 New York Times bestsellers. His book What the Dog Saw is a compilation of stories published in the New Yorker. Gladwell graduated from the University of Toronto, Trinity College, with a degree in history. He was born in England, grew up in rural Ontario, and now lives in New York City.