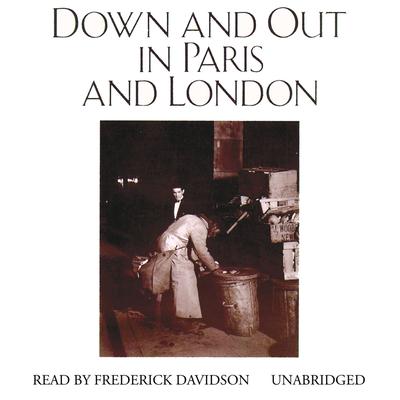 Down and Out in Paris and London

Orwell's own experiences inspire this semi-autobiographical novel about a penniless man living in Paris in the early 1930s. The narrator's poverty brings him into contact with strange incidents and characters, which he manages to chronicle with great sensitivity and graphic power. The latter half of the book takes the English narrator to his home city, London, where the world of poverty is different in externals only.

A socialist who believed that the lower classes were the wellspring of world reform, Orwell actually went to live among them in England and on the continent. His novel draws on his experiences of this world, from the bottom of the echelon in the kitchens of posh French restaurants to the free lodging houses, tramps, and street people of London. In the tales of both cities, we learn some sobering Orwellian truths about poverty and society.

“Excellent…a model of the realistic approach.” —New York Times Book Review
“The striking thing about Orwell as ‘a witness’ is that, while he experienced fully the sordid realities of his time, he remained miraculously uncontaminated…He retained a rebellious clarity of vision…graphic…and wryly amusing.” —Atlantic Monthly
“The most lucid portrait of poverty in the English language…combines good narrative with wit, humor, and honest realism.” —Nation
“Genuine, unexaggerated, and intelligent.” —New Republic