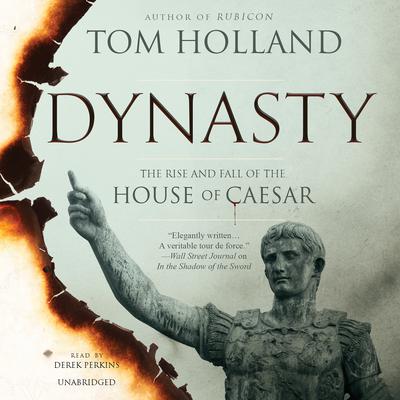 Dynasty: The Rise and Fall of the House of Caesar

An October 2015 Amazon Best Book of the Month

Author and historian Tom Holland returns to his roots in Roman history and the audience he cultivated with Rubicon—his masterful, witty, brilliantly researched popular history of the fall of the Roman republic—with Dynasty, a luridly fascinating history of the reign of the first five Roman emperors.

Dynasty continues Rubicon’s story, opening where that book ended: with the murder of Julius Caesar. This is the period of the first and perhaps greatest Roman emperors. It’s a colorful story of rule and ruination, from the rise of Augustus to the death of Nero. Holland’s expansive history also has distinct shades of I, Claudius, with five wonderfully vivid (and in three cases, thoroughly depraved) emperors—Augustus, Tiberius, Caligula, Claudius, and Nero—featured, along with numerous fascinating secondary characters. Intrigue, murder, naked ambition and treachery, greed, gluttony, lust, incest, pageantry, decadence—the tale of these five Caesars continues to cast a mesmerizing spell across the millennia.

“Dynasty surely secures his place among the foremost writers of popular history practicing today.” —Wall Street Journal
“Has all the gripping detail and narrative momentum of a novel…Give[s] the reader a startlingly visceral sense of the violence and brutality and wretched excess of ancient Rome.” —New York Times
“This is great material, and Holland does it justice with a chiseled prose style and an eye for the luminous detail…Holland is a master of narrative history. On the strength of Dynasty, he deserves a laurel wreath.” —Washington Post
“It has Holland’s usual novelistic ability to bring a narrative alive, together with his extraordinary command of ancient sources.” —New York Times Book Review
“Knits the history of ancient Rome…with a skill so dextrous you don’t notice the stitching…A sensational story.” —Guardian (London)
“A vivid account of five Roman emperors, emphasizing their vices and vicious behavior with less attention to the vast empire, which continued to prosper despite them.” —Kirkus Reviews
“Narrator Derek Perkins’ strong voice, clipped accent, and brisk pacing keep the narrative vivid and energetic. His reading makes the history into something between a news dispatch and a compelling novel—it’s anything but dry—and he has the intelligence to deliver handily both the historical detail and Holland’s interesting interpretations of character…This is lurid popular history built on a solid intellectual frame, and Perkins has the gifts to handle all of it.” —AudioFile
“[A] rollicking account of the Julio-Claudians…A meditation on the enduring power and possibilities of storytelling.” —Financial Times

Tom Holland gained the top degree at Cambridge before earning his PhD at Oxford. He is the author of the novels The Bone Hunter, Slave of My Thirst, and Lord of the Dead, and several nonfiction history books, including Rubicon, Persian Fire, and The Histories, a new translation of Herodotus. He wrote and presented Islam: The Untold Story, a documentary commissioned for Channel 4 in Britain based on In the Shadow of the Sword. He lives in London with his wife and two daughters.