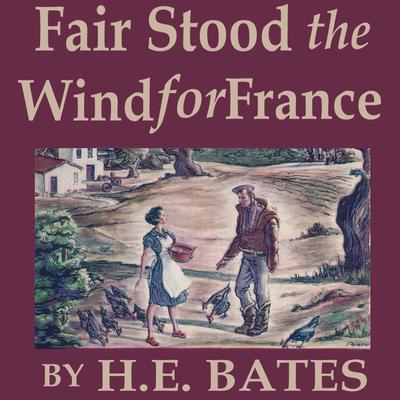 Fair Stood the Wind for France

When John Franklin brings his plane down into Occupied France at the height of the Second World War, there are two things in his mind: the safety of his crew, and his own badly injured arm. It is a stroke of unbelievable luck when the family of a French farmer offers them protection. The family’s courage derives from different sources. In Françoise, it was faith, a piety so humble and complete that the Reich could not touch her spirit. In her father, it was a glorious stubbornness; in her grandmother, a certitude born of surviving two wars. And in Pierre, it was hatred—a hatred so deep that only rarely did it flash on the surface.

All through the delirious pain of his wounded arm, Franklin felt Françoise’s presence like a cool, comforting hand. In the end, it was her courage and, above all, her faith that saved him—saved him not only from the enemy, but from himself.

“During World War II, [Bates] was commissioned by the RAF to write fiction about the war; Fair Stood the Wind for France…was one of the outstanding results.” —Time
“The faces are familiar: the British flier who makes a forced landing in France, the Nazis who sieze hostages, the farmer’s daughter who supplies the love interest. In the hands of a sensitive, accomplished writer, however, the formula expands into a tender, highly effective story.” —Esquire
“Geoffrey Howard reads the story in a tautly economical voice, which heightens Franklin’s desperate emotion and effort as he struggles to survive and save his crew…Howard’s restrained delivery carries the modern reader into the heart of this remarkable story.” —AudioFile
“A holding story—stark and sustaining interest—less intricately plotted than some of the stories of escape, but with greater literary quality and emotional values…Bates is an accomplished stylist, he has an aesthetic awareness, a realization of the psychological casualties of war to make this more than external entertainment.” —Kirkus Reviews
“Unsurpassably fine in their emotional eloquence and the transporting power of their natural descriptions.” —Jonathan Raban, award-winning travel writer

H. E. Bates (1905–1974) was born in Rushden, Northamptonshire. Before becoming a writer, he worked as a reporter and a warehouse clerk. He is best known for his works Love for Lydia, The Darling Buds of May, and My Uncle Silas, all of which have been adapted for television or film.