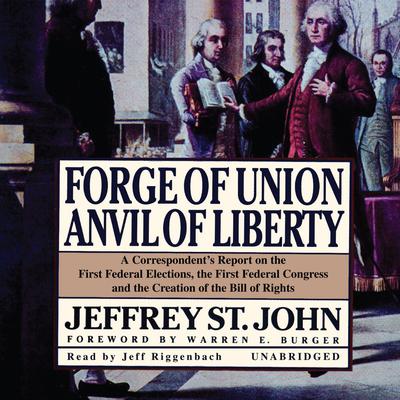 One of the most important news stories of the last two centuries comes to life in this “eyewitness account” of America's first Federal elections, the First Congress, and the creation of the Bill of Rights. In a swift-moving and colorful chronicle written by St. John as though he were an on-the-scene reporter, listeners will discover how Madison had to fight both friend and foe of the Constitution to pass a Federal Bill of Rights in the First Congress; why Washington and Madison saw the future of America in the frontier West and not in Europe; and how Spanish and British intrigues—and hostile Indian tribes on the American frontier—posed a threat to the survival of the new national government.

Vastly entertaining, based on documented and newly-available sources, this book is both a popular history and an important contribution to the study of the founding of the American Republic.

“This book, like the first two of St. John’s trilogy, tells an exciting story of our nation’s founding, which should engage readers of all ages and backgrounds.” —Warren Burger, former chief justice, US Supreme Court
“[St. John] characterizes the Constitution as a ‘living document,’ interpreted from its beginnings in social and political contexts…a useful introduction to its subject.” —Publishers Weekly

Jeffrey St. John is the author of six books, and has written extensively for the New York Times, Chicago Tribune and the Los Angeles Times. He won the National Press Foundation award for writing on the Constitution, and his work in television has received two Emmys.