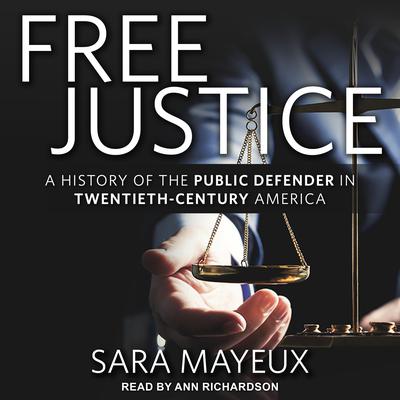 Free Justice: A History of the Public Defender in Twentieth-Century America

Though often taken for granted, the modern American public defender is a recent invention with a surprisingly contentious history—one that offers insights not only about the "carceral state," but also about the contours and compromises of twentieth-century liberalism.

First gaining appeal amidst the Progressive Era fervor for court reform, the public defender idea was swiftly quashed by elite corporate lawyers who believed the legal profession should remain independent from the state. Public defenders took hold in some localities but not yet as a nationwide standard. By the 1960s, views had shifted. Gideon v. Wainwright enshrined the right to counsel into law and the legal profession mobilized to expand the ranks of public defenders nationwide. Yet within a few years, lawyers had already diagnosed a "crisis" of underfunded, overworked defenders providing inadequate representation—a crisis that persists today. This book shows how these conditions, often attributed to recent fiscal emergencies, have deep roots, and chronicles the intertwined histories of constitutional doctrine, big philanthropy, professional in-fighting, and Cold War culture that made public defenders ubiquitous but embattled figures in American courtrooms.