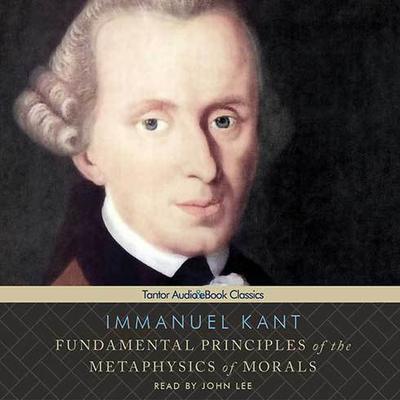 Fundamental Principles of the Metaphysics of Morals

Immanuel Kant's Fundamental Principles of the Metaphysics of Morals, first published in 1785, lays out Kant's essential philosophy and defines the concepts and arguments that would shape his later work. Central to Kant's doctrine is the categorical imperative, which he defines as a mandate that human actions should always conform to a universal, unchanging standard of rational morality. Directly opposed to utilitarian philosophy, Kant's theories have been broadly influential since their publication and stand as a seminal contribution to ethical thought. Although Kant expanded upon the ideas defined here in his later work, including the Critique of Pure Reason and the Metaphysics of Morals, it is in his Fundamental Principles of the Metaphysics of Morals that they are communicated in their most clear, concise form. This edition is the translation by Thomas Kingsmill Abbott.

Immanuel Kant (1724–1804) was a Prussian philosopher whose best-known works include the Critique of Pure Reason, the Critique of Practical Reason, the Critique of Judgment, and the Metaphysics of Morals. The fourth of eleven children, he attended the University of Königsberg beginning in 1740, where he later became a professor of philosophy. A central figure in moral philosphy, Kant’s doctrines rely upon the principles of human autonomy and rationality. His work influenced—either as a foundation or a point of opposition—such later philosophers as Hegel, Schopenhauer, Nietzsche, and Foucault, and his ideas have affected fields ranging from metaphysics and ethics to epistemology and political philosophy.