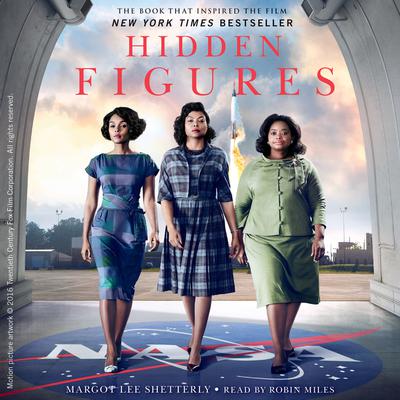 Hidden Figures: The American Dream and the Untold Story of the Black Women Mathematicians Who Helped Win the Space Race

Winner of the Anisfield-Wolf Book Award

Winner of the NAACP Image Award for Nonfiction

Winner of the ALA Black Caucus Award for Best Nonfiction Book

The phenomenal true story of the Black female mathematicians at NASA whose calculations helped fuel some of America’s greatest achievements in space. This book is the basis for the multiaward-winning motion picture.

Before John Glenn orbited the earth, or Neil Armstrong walked on the moon, a group of dedicated female mathematicians known as “human computers” used pencils, slide rules, and adding machines to calculate the numbers that would launch rockets, and astronauts, into space.

Among these problem-solvers were a group of exceptionally talented African American women, some of the brightest minds of their generation. Originally relegated to teaching math in the South’s segregated public schools, they were called into service during the labor shortages of World War II, when America’s aeronautics industry was in dire need of anyone who had the right stuff.

Suddenly, these overlooked math whizzes had a shot at jobs worthy of their skills, and they answered Uncle Sam’s call, moving to Hampton, Virginia, and the fascinating, high-energy world of the Langley Memorial Aeronautical Laboratory.

Even as Virginia’s Jim Crow laws required them to be segregated from their white counterparts, the women of Langley’s all-Black “West Computing” group helped America achieve one of the things it desired most: a decisive victory over the Soviet Union in the Cold War—and complete domination of the heavens.

Starting in World War II and moving through to the Cold War, the Civil Rights Movement and the Space Race, Hidden Figures follows the interwoven accounts of Dorothy Vaughan, Mary Jackson, Katherine Johnson, and Christine Darden, four African American women who participated in some of NASA’s greatest successes. It chronicles their careers over nearly three decades as they faced challenges, forged alliances, and used their intellect to change their own lives—and their country’s future.

“Blends impressive research with an enormous amount of heart in telling these stories.” —Boston Globe
“Moving from World War II through NASA’s golden age, touching on the civil rights era, the Space Race, the Cold War and the women’s rights movement, Hidden Figures interweaves a rich history of mankind’s greatest adventure with the intimate stories of five courageous women whose work forever changed the world.” —BookRiot
“Shetterly’s highly recommended work offers up a crucial history that had previously and unforgivably been lost.” —Library Journal (starred review)
“Shetterly…[provides] the depth and detail of a skilled historian and the narrative aplomb of a masterful storyteller.” —BookReporter.com
“The depth and detail that are the book’s strength make it an effective, fact-based rudder.” —Seattle Times
“Using personal anecdotes to illuminate the larger forces at play…Shetterly crafts a narrative that is crucial to understanding subsequent movements for civil rights.” —Publishers Weekly (starred review)
“Their story is inspiring and enlightening.” —Kirkus Reviews
“Miles’ inflections, rhythm, and pace move the story forward in a fascinating timeline of events.” —AudioFile

Margot Lee Shetterly is a writer who grew up in Hampton, Virginia, where she knew many of the women in her book Hidden Figures. She is an Alfred P. Sloan Foundation Fellow and the recipient of a Virginia Foundation for the Humanities grant for her research on women in computing.