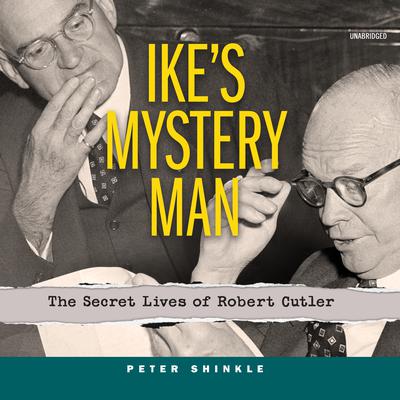 This exhilarating Cold War narrative takes listeners from top-secret Cabinet Room meetings to exclusive social clubs, and into the pages of a powerful man’s intimate diary. Ike’s Mystery Man brings a new dimension to our understanding of the inner-workings of the Eisenhower White House. It also shines a bright light on the indispensable contributions and sacrifices made by patriotic gay Americans in an era when Executive Order 10450 banned anyone suspected of “sexual perversion,” i.e. homosexuality, from any government job, and gays in the government were persecuted by the likes of Joseph McCarthy and Roy Cohn in the Senate, and J. Edgar Hoover and Clyde Tolson at the FBI.

Ike’s Mystery Man shows that Eisenhower’s National Security Advisor Robert “Bobby” Cutler—working alongside Ike and also the Dulles brothers at the CIA and State Department—shaped US Cold War strategy in far more consequential ways than has been previously understood. Bobby also left behind a six-volume diary which reveals that he was in love with a man half his age, NSC staffer Skip Koons. Their friend Steve Benedict, who also is gay, became Ike’s White House Security Officer. In addition to Bobby’s diary, Ike’s Mystery Man relies on thousands of personal letters, interviews, and previously classified archives to tell a gripping story that has never before been told.

“An important, deeply researched contribution to the history of one of the sorrier episodes in American history…This is a book that deserves, and is sure to get, a wide audience.” —Michael Isikoff, #1 New York Times bestselling author
“An extraordinary story of an able public servant, a man who held the nation’s most sensitive secrets, who also happened to be gay—at a time when such a thing was supposed to be impossible. Therein lies a gripping, moving tale.” —Evan Thomas, New York Times bestselling author
“This informative biography…is sure to appeal particularly to those interested in the history of the Cold War and the contributions of LGBTQ people in American government.” — Publishers Weekly
“A honeyed, scintillating, and ultimately sad tale of gay love at the highest reaches of the Eisenhower White House…Peter Shinkle tells the story of his great uncle Robert Cutler with grace and sensitivity…Shinkle’s stunning book is well-documented with previously undisclosed diaries and letters. Ike’s Mystery Man is a formidable achievement, casting new light on America in the 1950s.” —Kai Bird, Pulitzer Prize–winning coauthor
“Ike’s Mystery Man is a historical treasure unearthed…It gracefully reveals how Ike’s “unseen arm” [Cutler] shaped and guided many of the President’s most important foreign policies. It also unveils the intimate unknown painful story of a gay man’s secret love within the homophobic councils of government. A must-read for all Cold War scholars, it is a great read for everyone else.” —Martin J. Sherwin, Pulitzer Prize–winning coauthor
“This astonishing American story transcends politics. It is about how power was wielded in Washington during the 1950s, but also about the eternal conflict between public life and private emotion. Poignant diary entries enrich the narrative of a presidential counselor who spent his life dealing with that conflict.” —Stephen Kinzer, author of The True Flag
“Amazing…Beautifully researched and written.” —Priscilla J. McMillan, author of The Ruin of J. Robert Oppenheimer

Peter Shinkle worked for nineteen years as a reporter at various news organizations, including most recently the St. Louis Post-Dispatch. He covered the federal court system, and also wrote investigative stories on subjects ranging from improper disposal of radioactive waste to contamination spread by a lead mining company. Shinkle is the great-nephew of Robert Cutler.