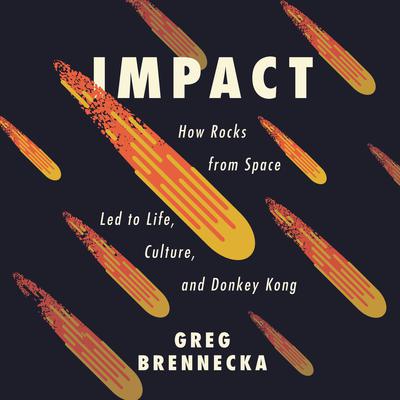 Impact: How Rocks from Space Led to Life, Culture, and Donkey Kong

A Short History of Nearly Everything meets Astrophysics for People in a Hurry in this humorous, accessible exploration of how meteorites have helped not only build our planet but steered the evolution of life and human culture.

The Solar System. Dinosaurs. Donkey Kong. What is the missing link? Surprisingly enough, it's meteorites. They explain our past, constructed our present, and could define our future.

Impact argues that Earth would be a lifeless, inhospitable piece of rock without being fortuitously assaulted with meteorites throughout the history of the planet. These bombardments transformed Earth’s early atmosphere and delivered the complex organic molecules that allowed life to develop on our planet. While meteorites have provided the raw materials for life to thrive, they have radically devastated life as well, most famously killing off the dinosaurs and paving the way for humans to evolve to where we are today.

As noted meteoriticist Greg Brennecka explains, meteorites did not just set us on the path to becoming human, they helped direct the development of human culture. Meteorites have influenced humanity since the start of civilization. Over the centuries, meteorite falls and other cosmic cinema have started (and stopped) wars, terrified millions, and inspired religions throughout the world.

With humor and an infectious enthusiasm, Brennecka reveals previously untold but important stories sure to delight and inform readers about the most important rocks on Earth.