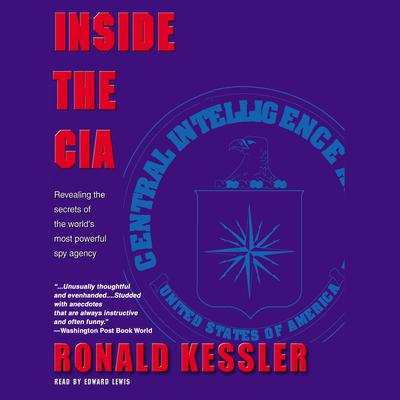 Inside the CIA: Revealing the Secrets of the World's Most Powerful Spy Agency

Ronald Kessler’s explosive bestseller, The FBI, brought down FBI Director William S. Sessions. Now, in this unparalleled work of investigative journalism, Kessler reveals the inner world of the CIA. Based on extensive research and hundreds of interviews, including two with active Directors of Central Intelligence William H. Webster and Robert M. Gates and with three former DCIs, Inside the CIA is the first in-depth, unbiased account of the Agency’s core operations, its abject failures, and its resounding successes.

Learn how the CIA spies on every country in the world except Great Britain, Australia, and Canada, undertaking covert action to influence or overthrow foreign governments or political parties. Discover how CIA analysts botched the job of foreseeing the Soviet economy’s collapse. This is your extraordinary tour through the world’s most successful house of spies.

“Unusually thoughtful and even handed…studded with anecdotes that are always instructive and often funny.” —Washington Post Book World
“The tour is never dull, especially since it features so much 007 gadgetry, from water-spraying silent drills to eavesdropping devices that work by zapping laser beams through windows.” —Los Angeles Times
“Kessler…reveals more about the agency’s structure, policies and key personnel than any previous writer has…A largely objective, evenhanded, highly informative survey.” —Publishers Weekly
“Definitely one of the most important books on the US intelligence community in some years.” —Booklist

Ronald Kessler is the New York Times bestselling author of The FBI, Inside the CIA, Moscow Station, Escape from the CIA, Spy vs. Spy, The Spy in the Russian Club, and The Richest Man in the World. He is an award-winning former correspondent for the Wall Street Journal and the Washington Post, and his articles appear in leading periodicals. Mr. Kessler lives in Potomac, Maryland.