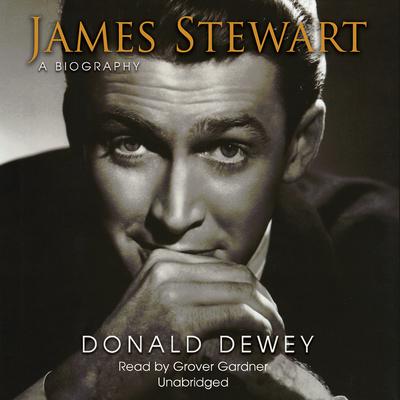 Fans feel they know Jimmy Stewart—the charismatic boy next door filled with righteous conviction, the American ideal. But Jimmy Stewart the image often eclipsed James Stewart the actor and the man. In this penetrating in-depth biography, Donald Dewey delves beneath the earnest Capraesque persona and into the usually unremarked turmoil of the actor's private life. Drawing upon extensive research and nearly two hundred interviews, he follows Stewart from his hometown of Indiana, Pennsylvania, and a childhood shaped by a strong-willed father, to the fateful encounter at Princeton University with actress Margaret Sullavan, to his first professional theatrical experiences on Cape Cod and the forging of a remarkable life-long friendship with Henry Fonda in New York, to his unexpected stardom at MGM.

This riveting biography of one of Hollywood's most beloved screen icons offers insights into the artistry behind Stewart's cinematic craft, his heroic military record in the Second World War, and much more, giving us far more than a legend to love.

“Dewey captures the on-screen Stewart. He rightfully locates much of the actor’s appeal and an underlying principle of his persona in the idea of vulnerability.” —Los Angeles Times
“Narrator [Grover Gardner], one of the best in the business, is the perfect choice for this superbly written portrait of a Hollywood legend. Dewey offers a rare treatment of a star: an actor’s career documented and analyzed with skill and integrity.” —Library Journal
“Going beyond biography, Donald Dewey captures the wistful America of the 1940s and ’50s and the screen icon who symbolized it…[Gardner] narrates with the same casual yet focused flair that characterized Stewart’s acting style. In this way, [Gardner] lends an instant comfort and intimacy to the text and its subject, while giving Dewey’s writing center stage to engage and captivate the listener.” —AudioFile
“A voluminous, highly intelligent look at one of the richest and most complex of Hollywood star personas…Very astute is the analysis of Stewart’s career choices, and the detailed recounting of his distinguished record as a bomber pilot and squad commander during WW II is downright moving…A model of how to do a serious but entertaining Hollywood biography.” —Kirkus Reviews

Donald Dewey is the author of Reasonable Doubts, which won the Nelson Algren Prize for Fiction, and also a biography of Marcello Mastroianni.