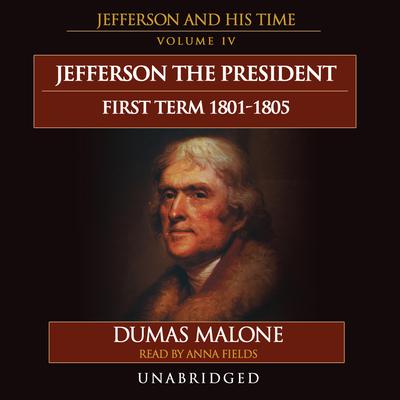 The Jefferson and His Time Series: Book 4

Part of a 1975Pulitzer Prize–winning series for History

The fourth volume in this Pulitzer Prize–winning work recounts Thomas Jefferson's eventful first presidential term. Though characterized by calmer seas than his second presidential voyage, Jefferson's first years in office find him confronting a nation deeply divided following the administrations of Washington and Adams. During this term he acquires the vast territory of Louisiana for the United States, challenges the growing power of the federal judiciary, continues to press his opposition to the Hamiltonian doctrine of an overriding central government, assumes the unchallenged leadership of his party, and is universally acknowledged as the preeminent American patron of science and general learning.

This epic work of history and biography is a fascinating look at the life and times of one of American history's greatest men.

“In the grand design of Mr. Malone’s comprehensive biography, the present volume maintains the magnificent quality of the preceding ones and in one sense outstrips them by fulfilling an urgent need in American scholarship…Henceforth no one will dare to pronounce on any aspect of it, without having studied closely this account of a great president by a great historian.” —New York Times Book Review
“This is the best so far of an already superbly distinguished series which will constitute when finished one of the finest historical biographies of our time.” —New York Review of Books
“Without question, this volume, rich in detail, perceptive and sensitive in analysis, and remarkably fair with the principal partisans, will be read for generations to come.” —Chicago Tribune