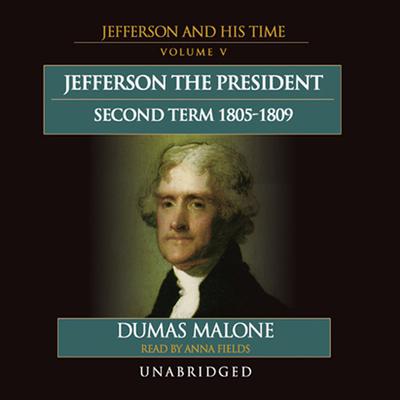 The Jefferson and His Time Series: Book 5

The fifth volume of the Pulitzer Prize–winning Jefferson series completes the story of his presidency, carrying him through his troubled second term but also to the end of an official career that spanned some forty years. Although Jefferson remained the major unifying factor in his party, the government, and the country, he was confronted by a succession of events that frustrated even his masterful statesmanship. Here is a vibrant account of Jefferson's disparate activities—sponsoring the Lewis and Clark Expedition, concluding the naval "war" with the Barbary pirates, engaging in a political duel with Chief Justice Marshall over the trial of Aaron Burr, attempting to impose an embargo on exports in reaction to the impression of American seamen by foreign powers, and, finally, retiring to his beloved haven at Monticello.

Jefferson's withdrawal from office was only a prelude to the outstanding public service he was still to render as a private citizen. The productive last years of Jefferson's life are the subject of the final volume in this monumental biography.

“Jefferson and His Time is a masterly achievement of scholarship, the finest biography of Jefferson we have or are likely to have, and a monumental triumph of the senior American historian.” —New York Times Book Review
“Malone illuminates with erudition and narrative skill. It would appear…that Malone has read and evaluated everything of consequence ever written by or about Jefferson.” —New Republic