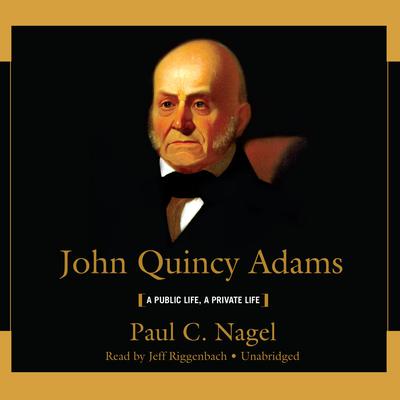 A United States minister, senator, president, and congressman in turn, John Quincy Adams was one of the most prevalent and dedicated Americans in history. Drawing from Adams' seventy-year diary, author Paul Nagel probes deeply into the psyche of this cantankerous, misanthropic, erudite, hardworking son of a former president whose remarkable career spanned so many offices. We learn about his passionate marriage to Louisa Johnson, his personal tragedies, including two sons lost to alcoholism, his recurring depression, exasperating behavior, and brilliant diplomacy. We see his frustration with the political life and the pleasure he drew from being a poet, critic, translator, essayist, botanist, and professor of oratory at Harvard. Nagel's great achievement, in this first biography of America's sixth president in a quarter century, is finally to portray Adams in all his talent and complexity.

“The best biography of Adams between two covers.” —New York Times Book Review
“Nagel has given us a John Quincy Adams with a heart as well as a head.” —Los Angeles Times Sunday Book Review
“With this excellent biography…Nagel focuses more on the private Adams, utilizing diary entries to provide keen insight into this extraordinary man…The result is a fascinating psychobiography. Highly recommended for all libraries.” —Library Journal
“An excellent book…Jeff Riggenbach beautifully narrates the story as interesting, vital historical biography…His inflections and vocal shadings urge you to listen further and to really appreciate this most accomplished public servant.” —AudioFile

Paul C. Nagel  was a professor of history, a college dean, and a university vice president before devoting himself to writing. The most notable results of his writing career are his books about the John Adams family, Descent from Glory (1983) and The Adams Women (1987), and another about the family of Richard Henry Lee and Robert E. Lee, The Lees of Virginia (1990). He has been president of the Southern Historical Association and a trustee of the Colonial Williamsburg Foundation, and is a fellow of the Pilgrim Society, a fellow of the Society of American Historians, a cultural laureate of Virginia, and a contributing editor of American Heritage. He and his wife live in Minneapolis.