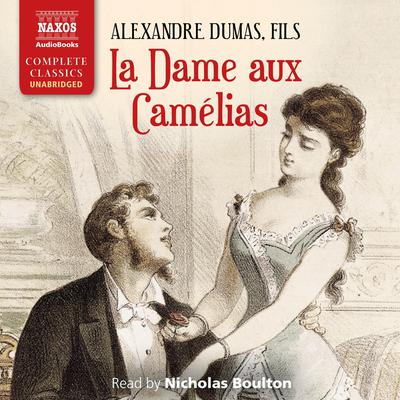 The tragic but doomed love of Marguerite and Armand that is recounted so passionately in  La Dame aux Camélias had immediate impact: Dumas's novel became one of the great love stories from its first publication in 1848. The title role of the consumptive heroine and her ultimate sacrifice inspired actresses from Sarah Bernhardt to Greta Garbo, and led Giuseppe Verdi to write  La traviata . In the hands of Nicholas Boulton, the story of passion and conflict is as fresh and moving as when it was first written.

Alexandre Dumas fils (1824–1895), was the illegitimate son of Alexandre Dumas, père, who followed in his father’s footsteps becoming a celebrated author and playwright. In 1831 his father legally recognized him and ensured the young Dumas received the best education possible at the Institution Goubaux and the Collège Bourbon. At that time, the law allowed the elder Dumas to take the child away from his mother. Her agony inspired Dumas fils to write about tragic female characters. In almost all of his writings, he emphasized the moral purpose of literature and in his 1858 play, Le fils Naturel (The Illegitimate Son), he espoused the belief that if a man fathers an illegitimate child, then he has an obligation to legitimize the child and marry the woman. In 1844 Dumas, fils, moved to Saint-Germain-en-Laye. There, he met Marie Duplessis, a young courtesan who would be the inspiration for his romantic novel, Camille (La Dame aux Camillas).