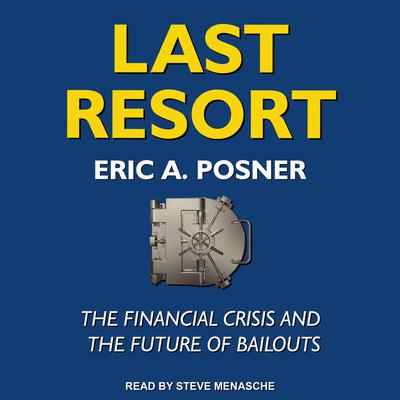 Last Resort: The Financial Crisis and the Future of Bailouts

By Eric A. Posner
Read by Steve Menasche

The bailouts during the recent financial crisis enraged the public. They felt unfair—and counterproductive: people who take risks must be allowed to fail. If we reward firms that make irresponsible investments, costing taxpayers billions of dollars, aren't we encouraging them to continue to act irresponsibly, setting the stage for future crises? And beyond the ethics of it was the question of whether the government even had the authority to bail out failing firms like Bear Stearns and AIG.

The answer, according to Eric A. Posner, is no. The federal government freely and frequently violated the law with the bailouts—but it did so in the public interest. An understandable lack of sympathy toward Wall Street has obscured the fact that bailouts have happened throughout economic history and are unavoidable in any modern, market-based economy. And they're actually good. Contrary to popular belief, the financial system cannot operate properly unless the government stands ready to bail out banks and other firms.

Taking up the common objections raised by both right and left, Posner argues that future bailouts will occur. Acknowledging that inevitability, we can and must look ahead and carefully assess our policy options before we need them.

“For nonlawyers seeking a closely argued, technical attack on the mechanics of recent federal bailouts, this work by Posner is the top choice.” —Library Journal