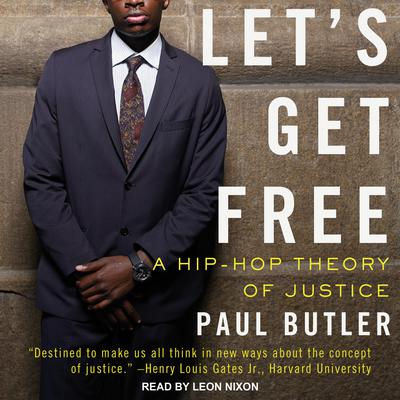 Let's Get Free: A Hip-Hop Theory of Justice

Paul Butler was an ambitious federal prosecutor, a Harvard Law grad who gave up his corporate law salary to fight the good fight—until one day he was arrested on the street and charged with a crime he didn’t commit. The Volokh Conspiracy calls Butler's account of his trial "the most riveting first chapter I have ever read."

In a book Harvard Law professor Charles Ogletree calls "a must read," Butler looks at places where ordinary citizens meet the justice system—as jurors, witnesses, and in encounters with the police—and explores what "doing the right thing" means in a corrupt system.

Since Let's Get Free's publication in spring 2009, Butler has become the go-to person for commentary on criminal justice and race relations: he appeared on ABC News, Good Morning America, and Fox News, published op-eds in the New York Times and other national papers, and is in demand to speak across the country. The audio edition brings Butler’s groundbreaking and highly controversial arguments—jury nullification (voting "not guilty" in drug cases as a form of protest), just saying "no" when the police request your permission to search, and refusing to work inside the system as a snitch or a prosecutor—to a whole new audience.

Paul Butler, a former federal prosecutor, provides legal commentary for CNN, NPR, and MSNBC and writes for the New York Times and Politico. A law professor at Georgetown University, he is the author of Let’s Get Free: A Hip-Hop Theory of Justice and lives in Washington, DC.