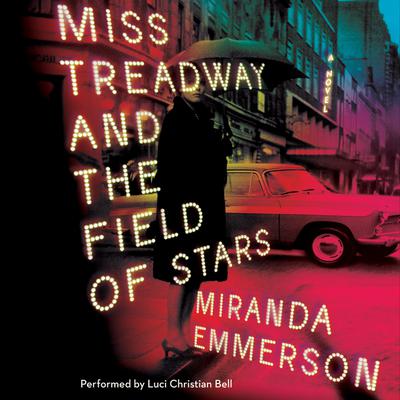 Miss Treadway and the Field of Stars: A Novel

In this sparkling debut novel imbued with the rich intrigue of Kate Atkinson’s literary mysteries and the spirited heart of Major Pettigrew’s Last Stand, a disparate group of Londoners plunge into a search for a missing American actress.

In the dreary days of November 1965, American actress Iolanthe Green has become the toast of the West End. Charismatic, mysterious, and beautiful, she brings color and a sprinkling of glamour to the scuffed boards of Soho’s Galaxy Theatre. But one evening, after another rapturously received performance, Iolanthe walks through the stage door, out into the cold London night, and vanishes.

All of London is riveted as Fleet Street speculates about the missing actress’s fate. But as time passes and the case grows colder, the public’s interest turns to the unfolding Moors Murders and erupting political scandals. Only Anna Treadway, Iolanthe’s dresser at the Galaxy, still cares. A young woman of dogged determination with a few dark secrets of her own, she is determined to solve the mystery of the missing actress.

A disparate band of London émigrés—an Irish policeman, a Turkish coffee-house owner and his rebellious daughter, and a literature-loving Jamaican accountant—joins Anna in her quest, an odyssey that leads them into a netherworld of jazz clubs, backstreet doctors, police brutality, and seaside ghost towns. Each of these unusual sleuths has come to London to escape the past and forge a new future. Yet as they draw closer to uncovering the truth of Iolanthe’s disappearance, they may have to face the truth about themselves.

“Fabulous depiction of a London where the ‘Swinging Sixties’ hides a darker, more complicated story of prejudice and struggle. I loved the strong women and evocative writing.” —Helen Simonson, New York Times bestselling author
“Here’s something you don’t often experience while reading a page-turning thriller: stopping to reread paragraphs because they contain truths that are ‘Aha’-moment levels of profound.” —Elle (Canada)
“The story is layered and interesting…The history revealed of Anna Treadway as she searches for her missing friend is intriguing, as she is a well-developed character.” —RT Book Reviews
“Atmospheric…Backstories are revealed by frequent forays back in time [which] helps to deepen the characters.” —Booklist
“Narrator Luci Christian Bell brings to life a Jamaican accountant; a Pakistani restaurant owner and his daughter; a charismatic American actress and her English dresser, who has the instincts of a detective; and several Irish immigrants. Bell is an actor from Texas, but her many deft characterizations show no trace of her origin. Her portrayals are vivid and emotionally complex. This well-written, well-delivered mystery even includes a burgeoning romance.” —AudioFile

Miranda Emmerson is a playwright and author living in Wales. She studied English at Oxford and Playwriting Studies at Birmingham, as well as working as a journalist, a web editor, and a writer for people with a learning disability. In the past fifteen years, she has written numerous drama adaptations for BBC Radio 4 as well as some highly-acclaimed original drama. Her first book, Fragrant Heart, an account of her time living and traveling in Asia, was published in 2014.