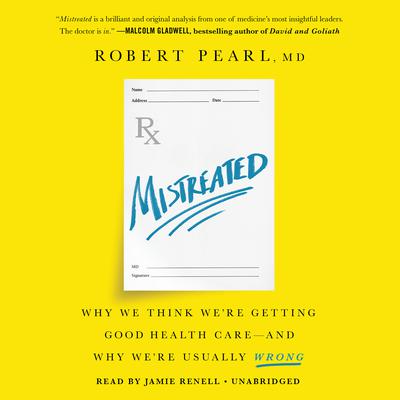 Mistreated: Why We Think We’re Getting Good Health Care—and Why We’re Usually Wrong

Despite all the debate about health care, Americans tend to assume they are in the best of hands when they enter the hospital. This is inaccurate: American health care is in the bottom half of all industrialized countries.

This is only the largest in a broad set of misperceptions. We appropriately worry about the security of technology, but fail to see how its absence kills hundreds of people every day from medical errors. We overvalue the impact of intervention on saving lives and ignore the 200,000 people who die each year unnecessarily from diseases they did not have to get. We worry that end of life discussions and palliative care will lead to “death squads,” when research proves that people actually live not only better, but also longer. We demand modern information technology from our banks, airlines, retailers, and hotels, but we passively accept last century’s technology in our health care.

It’s not just patients who get things wrong. Physicians perceive that the dollars they take from drug companies don’t alter their prescribing habits, but the data demonstrates that for every dollar the pharmaceutical world spends on doctors, they get ten dollars in return. Academic researchers deny that their results are influenced by which company funds the work, but in 95 percent of the cases, the outcome supports the funding source.

Dr. Robert Pearl has seen these mistakes from all sides: as a concerned citizen, a patient, a health industry leader, and most importantly, a victim of bureaucracy, whose own father died due in part to medical error. In this book, Pearl explains why misperception is so common in medicine, both for patients and physicians. Solving the challenges of health care today, including excessive costs, poor quality, and the lack of convenience will require an understanding of this phenomenon, and an approach that aligns health care delivery with up-to-date information and data. It emphasizes the power of context, and how through integration, prepayment, information technology, and physician leadership, superior outcomes can be achieve. It draws on other industries and companies like Amazon and Uber that were able to overcome customer fear and shift perception, and provides a road map for the future.

Dr. Robert Pearl is the former CEO of The Permanente Medical Group. Named one of Modern Healthcare’s 50 most influential physician leaders, he is a clinical professor of plastic surgery at Stanford University School of Medicine and is on the faculty of the Stanford Graduate School of Business, where he teaches courses on strategy and leadership and lectures on information technology and health-care policy. He is the author of the Washington Post bestseller Mistreated, hosts the popular podcast “Fixing Healthcare,” publishes a newsletter with over 10,000 subscribers, and is a regular contributor to Forbes. He has been featured on CBS This Morning, CNBC, NPR, and in Time, USA Today, and Bloomberg News. He is a frequent keynote speaker at health-care and medical technology conferences.