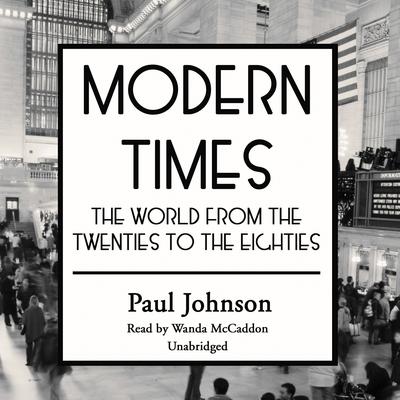 Modern Times: The World from the Twenties to the Eighties

A New York Times Best Book of the Year

Earning the eleventh spot on National Review's list of the Best Nonfiction Books of the Century, this fast-paced, all-encompassing narrative history covers the great events, ideas, and personalities of the six decades following the end of World War I, and offers a full-scale—if controversial—analysis of how the modern age came into being and where it is heading.

Beginning on May 29, 1919, when photographs of the solar eclipse confirmed the truth of Einstein's theory of relativity, Johnson goes on to describe Freudianism, the establishment of the first Marxist state, the chaos of "Old Europe," the Arcadian twenties, and the new forces in China and Japan. Also discussed are Karl Marx, Hitler, Mussolini, Stalin, Roosevelt, Gandhi, Castro, Kennedy, Nixon, the '29 crash, the Great Depression, Roosevelt's New Deal, and the massive conflict of World War II.