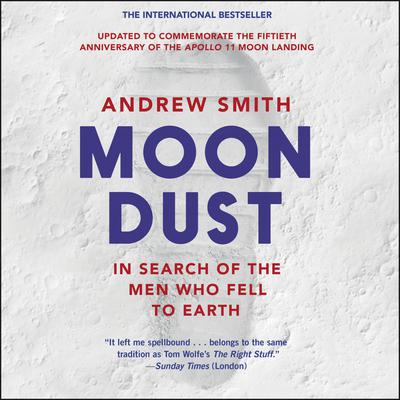 Moondust: In Search of the Men Who Fell to Earth

In time for the 50th anniversary of the Apollo 11 Moon landing comes this edition of journalist Andrew Smith’s book, now updated with a new Afterword, that tells the fascinating story of twelve astronauts who ventured to space, and his interviews with nine of the surviving men.

The Apollo lunar missions of the 1960s and 1970s have been called the last optimistic acts of the twentieth century. Twelve astronauts made this greatest of all journeys and were indelibly marked by it, for better or for worse. Journalist Andrew Smith tracks down the nine surviving members of this elite group to find their answers to the question "Where do you go after you've been to the Moon?"

A thrilling blend of history, reportage, and memoir, Moondust rekindles the hopeful excitement of an incandescent hour in America's past when anything seemed possible as it captures the bittersweet heroism of those who risked everything to hurl themselves out of the known world—and who were never again quite able to accept its familiar bounds.