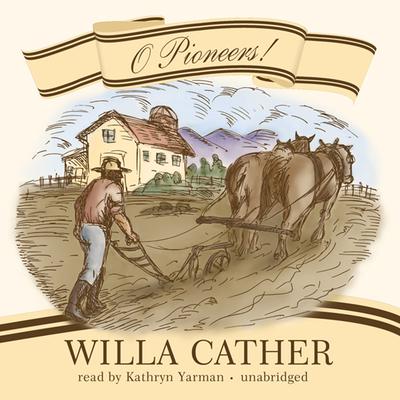 Huffington Post Pick of Books to Help You Understand America

O Pioneers! is a story of the immigrants who came to America to build new lives for themselves. Struggling against poverty, ignorance, drought, and storm, they came to love and understand the land, until it rewarded them with a richness exceeding all imaginings.

The Bergsons are a family of strong-willed Swedish immigrants who have come to make a living on the great prairie. When the father, John, dies, worn out by disease and debt, his eldest daughter, Alexandra, becomes the head of the family. This is the story of her love affair with the land—an American Midwest that is vast and golden.

“Yarman’s reading is one of the best I have heard…Her tempo and modulation are especially noteworthy, adding tremendous emotional impact to the interactions and experiences of the characters.” —Kliatt (audio review)
“A century after her heyday, the novelist from the Nebraska frontier remains unchallenged as the literary voice of the state. In her classic O Pioneers!, she celebrates the grit and determination of a family of Swedish-American immigrants who battle the elements and isolation to keep their family farm afloat. To modern eyes, Willa Cather’s tacit acceptance of the settler movement that displaced countless Native American tribes is troubling, but the tale serves as a potent reminder that the white families of the Heartland, so often cast as ‘real Americans,’ were once immigrants themselves.” —Huffington Post
“A direct human tale of love and struggle and attainment, a tale that is American in the best sense of the word.”  —New York Times
“Just as O Pioneers! is set in the high plain between two rivers called the Nebraska Divide, it reflects the imaginative divide in Cather’s work: a belief in social rootedness and a longing for artistic freedom.” —Elaine Showalter, author of A Jury of Her Peers

Willa Cather (1873–1947), the Pulitzer Prize–winning author of more than fifteen books, is widely considered one of the major fiction writers of the twentieth century. She grew up in Nebraska and is best known for her depictions of frontier life on the Great Plains in novels such as O Pioneers!, My Ántonia, and Song of the Lark. In 1944 she was awarded the American Academy of Arts and Letters Gold Medal for Fiction. She won the Pulitzer Prize in 1923 for One of Ours.