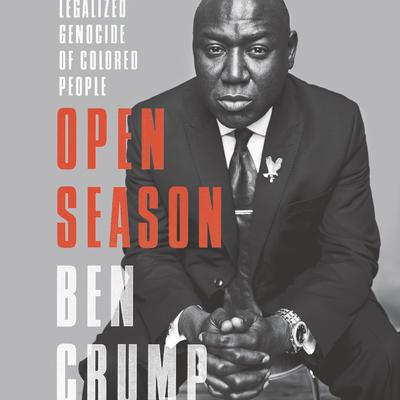 A Time Magazine Pick of Most Anticipated Books of 2019

A Kirkus Reviews Pick of Books That Challenge Racism

A BookRiot Pick of Best Books of the Season

The president of the National Bar Association and one of the most distinguished civil rights attorneys working today reflects on the landmark cases he has battled—including representing Trayvon Martin’s family—and offers a disturbing look at how the justice system is used to promote injustice in this memoir and clarion call as shocking and important as the bestsellers Just Mercy and Slavery by Another Name and Ava DuVernay’s film 13th.

Benjamin Crump firmly believes in the Constitution and its legal protections—that civil rights legislation covers all Americans, not just those privileged by race, wealth, or pedigree. A fierce and passionate advocate, he has devoted his career to fighting for justice for America’s marginalized. Open Season is his inspiring journey working on some of the most egregious cases that have shocked the nation, including those of Trayvon Martin and Michael Brown.

Shaped by his first-hand experience handling civil litigation matters in state and federal courts throughout the country, Open Season reveals the often hidden and systemic injustices minorities face, and illuminates how discrimination in the courthouse devastates real families and communities. Chronicling some of his most memorable legal battles, this brilliant litigator shockingly makes clear how our system is devised for certain people to lose and others to win, and, using evidence and facts, exposes how it is legal to harm—with the intent to destroy—people of color.

Crump offers a cogent analysis of legal tenets, including the 13th Amendment, the 1951 Genocide Petition to the United Nations, and controversial Stand Your Ground laws. He compares how race detrimentally influences sentencing, and reveals how police unions protect officers who shoot unarmed civilians. He also makes clear how budget cuts for education, the proliferation of guns, and high unemployment rates all directly contribute to higher crime rates.

America must live up to its promise to protect the rights of its citizens equally, Crump maintains. Thoughtful, well-reasoned, and powerfully persuasive, Open Season details one man's life mission preserving the hard-won justice for all.

“Open Season must occupy a dominant place in the classroom, in libraries, in the workplace, in police training programs. Crump’s masterful voice and expertise of America’s corrupt power structures will alter the hierarchy by which we dangerously abide.” —Patrisse Khan-Cullors, New York Times bestselling author and co-founder of Black Lives Matter
“Deeply disturbing account of how the justice system is used to maintain a system of inequality and justify the murder of black Americans.” —BookRiot
“There is much more to inequality and discrimination than we know, and Crump will open your eyes. Pay attention.” —Kirkus Reviews (starred review)
"[An] alarming yet credible account.” —Publishers Weekly

Benjamin Lloyd Crump is an attorney at Parks and Crump, LLC, and is president and cofounder of MyDad 360, a mentoring program for fathers. He has been named among the National Trial Lawyers Top 100 Lawyers and Ebony’s Power 100. He is a recipient of the NAACP Thurgood Marshall Award, the SCLC Martin Luther King Servant Leader Award, the National Urban League’s Whitney Young Award, the TV One/NAN Triumph Award, and the AKA Eleanor Roosevelt Award.