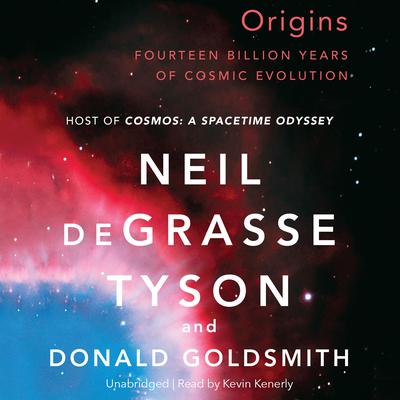 A thrilling and accessible tour of the cosmos

Our true origins are not just human, or even terrestrial, but in fact cosmic. Drawing on scientific breakthroughs and the current cross-pollination among geology, biology, astrophysics, and cosmology, Origins explains the soul-stirring leaps in our understanding of the cosmos. From the first image of a galaxy birth to Spirit rover's exploration of Mars, to the discovery of water on one of Jupiter's moons, coauthors Neil deGrasse Tyson and Donald Goldsmith conduct a galvanizing tour of the cosmos with clarity and exuberance.

“Who can ask for better cosmic tour guides to the universe than Drs. Tyson and Goldsmith?” —Michio Kaku, New York Times bestselling author of Physics of the Future
“Combining twenty-first–century astronomy, astrobiology, astrochemistry, and other disciplines, Origins is a fine guidebook with which to journey ‘back to the beginning of everything.’” —Amazon.com, editorial review
“[Tyson] distills the complex breakthroughs of geology, biology, and astrophysics into clear and lively prose.” —Barnes & Noble, editorial review
“Neil deGrasse Tyson and Donald Goldsmith…[in] a racy and nonmathematical style…encourage us to search for answers that could overturn much of what we think we already know. The task is daunting but the excitement glows from every page.” —New Scientist
“Tyson and Goldsmith search the depths of the universe for clues to how billions of heavenly bodies, Earth, and life itself began. They energetically cover the breadth of modern cosmology.” —Science News
“Animated, good-natured, and widely appealing.” —Eyepiece
“This is the most informative, congenial, and accessible general look at cosmology to come along since Carl Sagan’s Cosmos twenty-seven years ago…General readers of every stripe will benefit from the authors’ sophisticated, deeply knowledgeable presentation.” —Publishers Weekly (starred review)
“An accessible and extremely well-written exploration of the deep waters of cosmology, astrophysics, and exobiology.” —Kirkus Reviews (starred review)
“A terrific historical perspective…Amateur astronomers—in fact, any reader who enjoys popular science—will find fascinating information presented in clear but never patronizing language. Highly recommended.” —Library Journal
“The authors adopt a colloquial, even conversational style suited to readers new to the ideas and vocabulary of big-bang cosmology; they make comprehensible the connections between subatomic physics and the structure of the universe…Aiming for mass appeal, Tyson and Goldsmith cover the whole celestial block.” —Booklist

Neil deGrasse Tyson is an American astrophysicist, author, and science communicator. In 2017 he became the first American to win the prestigious Stephen Hawking Medal for science communication. He is the Frederick P. Rose Director of the Hayden Planetarium at the Rose Center for Earth and Space and a research associate in the Department of Astrophysics at the American Museum of Natural History. From 2006 to 2011 he hosted the educational science television show NOVA ScienceNow on PBS, and in March 2014 he became host of the television series Cosmos: A Spacetime Odyssey, an update of Carl Sagan’s Cosmos: A Personal Voyage. Tyson has written several New York Times bestselling nonfiction books.

Donald Goldsmith is an astronomy writer in Berkeley, California, and the author of more than twenty books.