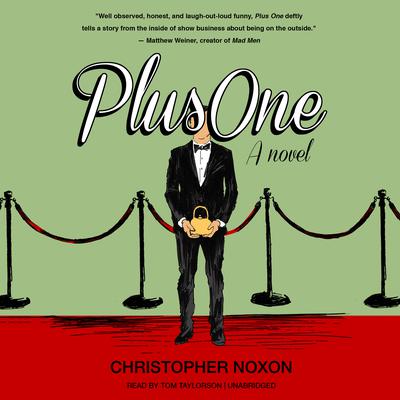 Plus One: A Novel

Christopher Noxon's debut novel Plus One is a comedic take on breadwinning women and caretaking men in contemporary Los Angeles. Alex Sherman-Zicklin is a mid-level marketing executive whose wife's fourteenth attempt at a television pilot is produced, ordered to series, and awarded an Emmy. Overnight, she's sucked into a mad show-business vortex and he's tasked with managing their new high-profile Hollywood lifestyle. He falls in with a posse of Plus Ones, men who are married to women whose success, income, and public recognition far surpasses their own. What will it take for him to regain the foreground in his own life?

“Behind every great man there’s a great woman…and in Noxon’s telling, behind every great woman there’s a charming, deeply conflicted guy (sometimes holding a very expensive handbag). Hilarious and unflinching, Plus One is a funny, sharply observed, heartbreaking look at love, power, and happily-ever-after in Hollywood.” —Jennifer Weiner, #1 New York Times bestselling author of Best Friends Forever
“Well observed, honest, and laugh-out-loud funny, Plus One tells a story from the inside of show business about being on the outside.” —Matthew Weiner, creator of Mad Men
“This comic debut novel by Los Angeles–based journalist Noxon revolves around a Hollywood self-identified misfit family…This fresh male take on modern relationships is too smart, focused, and funny to pass up.” —Library Journal
“In the LA entertainment world, Alex ­Sherman-Zicklin is a plus one. The Emmy ceremony invitation is addressed to his wife, Figgy, creator and writer of the cable show Tricks, about a housewife running a prostitution ring out of a scrapbooking shop, and the invitation notes, ‘plus one’…Debuting novelist Noxon, himself a plus one to a top TV writer-producer, pens a brisk romp that’s sometimes laugh-out-loud funny as it deals with the serious issues of roles and communication in a marriage. And just picture this on the big screen, with Jason Bateman as the lead.” —Booklist
“A funny, sharply observed novel about a guy with a first-world problem—a wife who’s a hugely successful TV writer and producer—and the identity crisis that goes along with it. Christopher Noxon has reimagined the Hollywood novel from a whole new perspective.” —Tom Perrotta, author of Election
“Hilarious and whip-smart, with a big beating heart at its center. I love this book, and so will you.” —Dana Reinhardt, author of We Are the Goldens and Odessa Again

Christopher Noxon is an accomplished journalist who has written for such publications as the New Yorker, Details, Los Angeles magazine, Salon, and the New York Times Magazine. His first book, Rejuvenile: Kickball, Cartoons, Cupcakes, and the Reinvention of the American Grown-Up, earned him interviews on such shows as The Colbert Report and Good Morning America and generated features in USA Today, the Wall Street Journal, and Talk of the Nation. Noxon happens to be married to a top TV writer-producer and does the school chauffeuring for their three children, so he knows whereof he speaks regarding Plus Ones. He lives in Los Angeles.