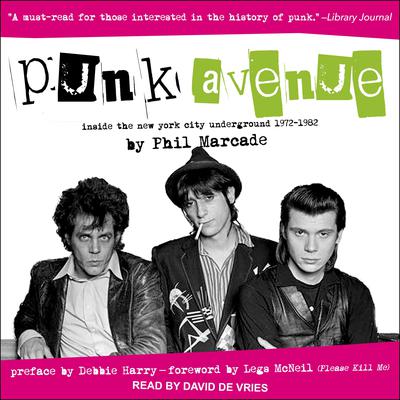 Punk Avenue is an intimate look at author Paris-born Phil Marcade's first ten years in the United States where he drifted from Boston to the West Coast and back, before winding up in New York City and becoming immersed in the early punk rock scene.

From backrooms of Max's and CBGB's to the Tropicana Hotel in Los Angeles and back, Punk Avenue is a tour de force of stories from someone at the heart of the era. With brilliant, often hilarious prose, Marcade relays first-hand tales about spending a Provincetown summer with photographer Nan Goldin and actor-writer Cookie Mueller, having the Ramones play their very first gig at his party, working with Blondie's Debbie Harry on French lyrics for her songs, enjoying Thanksgiving with Johnny Thunders' mother, and starting the beloved NYC punk-blues band The Senders.

Phil Marcade left Paris in his late teens to begin “a few months” of travel that would lead to a 40 year-stay in the U.S., mostly in New York City. He was at the center of the origins of the punk rock explosion, as a musician (founder and lead singer of The Senders) and scenester, forming intimate friendships with artists and musicians including Johnny Thunders, Nan Goldin, Cookie Muller, Wayne Kramer, Debbie Harry, Nancy Spungen and Willie DeVille. His first book, Au-delà de l’Avenue D (Scali, 2006), was published in France. In addition to writing, he works as a painter and graphic artist. He lives in Bologna, Italy.